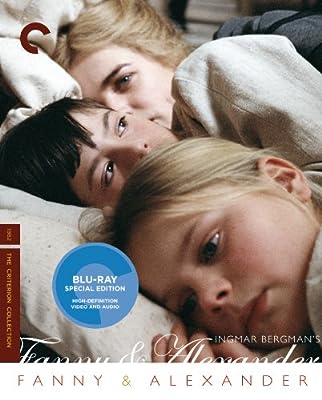 Price: $39.35
As of 2023-02-02 08:55:06 UTC (more info)
Product prices and availability are accurate as of 2023-02-02 08:55:06 UTC and are subject to change. Any price and availability information displayed on http://www.amazon.com/ at the time of purchase will apply to the purchase of this product.
Availability: Not Available - stock arriving soon
Buy Now from Amazon
Product Information (more info)
CERTAIN CONTENT THAT APPEARS ON THIS SITE COMES FROM AMAZON SERVICES LLC. THIS CONTENT IS PROVIDED 'AS IS' AND IS SUBJECT TO CHANGE OR REMOVAL AT ANY TIME.

Ingmar Bergman's magnum opus Fanny and Alexander takes us back to the year 1907, in a Swedish town of Uppsala right during the Christmas Eve celebration of the Ekdahl family who are wealthy, and the matriarch, Helena, who lives in an enormous home, introduces to a colorful eccentric cast of characters, who love to drink, laugh, cry, plot, and dream. Fanny and Alexander is without a doubt, Bergman’s most richly orchestrated work and splendor, and also one of his most accessible creations. Bergman strays away from his bleak and gloom aesthetics that audiences have come to associate him with. Gone are his tortured confrontations with the absence of God, or the impossibilities of romantic lasting relationships; themes which are replaced by the creative and wondrous landscapes of childhood and the imagination.

Through the eyes of ten-year-old Alexander, we witness the delights and conflicts of the Ekdahl family, a sprawling bourgeois clan in turn-of-the-twentieth-century Sweden. Ingmar Bergman (The Seventh Seal) intended Fanny and Alexander as his swan song, and it is the legendary director’s warmest and most autobiographical film, a four-time Academy Award–winning triumph that combines his trademark melancholy and emotional intensity with immense joy and sensuality. The Criterion Collection is proud to present both the theatrical release and the original five-hour television version of this great work. Also included in the box set is Bergman’s own feature-length documentary The Making of “Fanny and Alexander,” a unique glimpse into his creative process.

With Fanny and Alexander director Ingmar Bergman immediately plunges us into the perspective of looking at the world through the eyes of a child, who is free in the realm of fantasy, nightmares and the imagination. It is this world of dreams and nightmares, visions and theatrical pranks as the child who represents a young Bergman, embarks on a journey of self-discovery through the eccentric artistry of film and the theater. "The theater is my wife, and the cinema is my mistress,” Bergman once declared. InFanny and Alexander he devotes himself entirely to both, without raising thoughts of faithlessness or betrayal to either. WithFanny and Alexander, Bergman constructs the creative landscape of childhood, the loss of innocence and the confrontation between oppressive authoritative figures, in which all becomes the crucial artistic starting point of young Bergman's creative self. With Fanny and Alexander Bergman creates a massive and epic world where magic and ghosts and life and death coexist side by side, revolving around such complex themes as the love and security of the bourgeois family, the refuge and artistic playground of the theater, the cold and harsh strictness of the church, and the creative imagination of childhood fantasy which becomes an temporary escape from the bleakness of reality; along with the inspirations from the works of Dickens and Shakespeare.