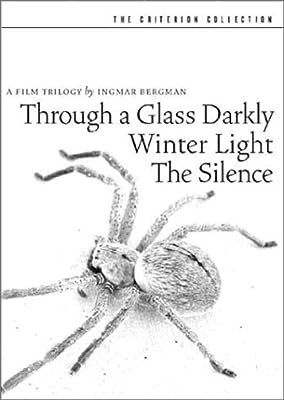 Price: $56.95
Availability: Not Available - stock arriving soon
Buy Now from Amazon
Product Information (more info)
CERTAIN CONTENT THAT APPEARS ON THIS SITE COMES FROM AMAZON SERVICES LLC. THIS CONTENT IS PROVIDED 'AS IS' AND IS SUBJECT TO CHANGE OR REMOVAL AT ANY TIME.

At the beginning of the 1960s, renowned film director Ingmar Bergman began work on what were to become some of his most powerful and representative works—the Trilogy. Already a figure of tremendous international acclaim for such masterworks as The Seventh Seal, Wild Strawberries, and The Virgin Spring, Bergman turned his back on the abundant symbolism and exotic imagery of his ‘50s work to focus on a series of impacted, emotionally explosive chamber dramas examining faith and alienation in the modern age. Utilizing a new cameraman—the incomparable Sven Nykvist—Bergman unleashed Through a Glass Darkly, Winter Light, and The Silence in rapid succession, exposing moviegoers worldwide to a new level of intellectual and emotional intensity. Each film employs minimal dialogue, eerily isolated settings, and searing performances from such Bergman regulars as Max von Sydow, Harriet Andersson, Gunnar Bjornstrand, Ingrid Thulin and Gunnel Lindblom in their evocation of a desperate world confronted with God’s desertion. Drawing on Bergman’s own severely religious upbringing and ensuing spiritual crisis, the films in the Trilogy are deeply personal, challenging, and enriching works that exhibit the filmmaker’s peerless formal mastery and fierce intelligence. The Criterion Collection is proud to present The Ingmar Bergman Trilogy: Through a Glass Darkly, Winter Light, and The Silence.

Between 1961 and 1963, Ingmar Bergman released a remarkable trilogy of so-called chamber dramas, each one concerned with the futility of sustaining faith in God, family, love, or much else. The series proved transitional for the internationally renowned Swedish filmmaker, securing his crucial collaboration with cinematographer Sven Nykvist (with whom Bergman would go on to make his many masterpieces--including Persona and Cries and Whispers--of the '60s, '70s, and early '80s), and underscoring a new preference for intimate, relationship-driven stories, austere settings, and haunting tones of emotional isolation and despair.

Through a Glass Darkly concerns a psychologically fragile woman, Karin (Harriet Andersson), who seeks recovery from a nervous breakdown while on a remote-island vacation with her family. Unfortunately, her father (Gunnar Björnstrand), a successful writer, regards her with clinical detachment, her husband (Max Von Sydow), a doctor, feels unavailing in the effort to treat her, and her brother (Lars Passgard) is wrapped up in his own quest for sexual fulfillment. Karin's descent into further loneliness and delusion exacerbates the heretofore unspoken alienation at the heart of this entire family, and drives the characters to brood over the existence of God (or, in Karin's case, imagine that God is the chilling spider hidden behind an attic door). Through a Glass Darkly is a heartbreaking, powerful work of art.

Winter Light reunites Björnstrand, this time playing a pastor suffering a crisis of faith while ministering to a shrinking congregation, and Von Sydow as a parishioner lost to acute anxiety over the possibility of a nuclear holocaust. Neither man can help or heal the other, or even inspire renewed confidence in practiced rituals and older, more certain views of the world. Set on a chilly, Sunday afternoon, Winter Light's heavy stillness, lack of music, preference for intense close-ups and distancing long shots, and barren setting all lead us inescapably into the core of a profound silence, an echo chamber in which love can't grow and religion rings hollow.

The Silence is the most abstract entry in the trilogy, a somewhat eerie story of two sisters, Esther (Ingrid Thulin) and Anna (Gunnel Lindblom), and the latter's son (Jörgen Lindström), all traveling by train to Sweden but forced to stay in a foreign country when Esther's chronic bronchial problems require her to rest. A stifling atmosphere, a desolate hotel, encounters with a troupe of carnival dwarves, Anna's anchoring illness, and an empty sexual encounter for Esther underscore the unnerving feeling that God has abandoned these characters to dubious salvation in their own connection. A highly memorable film. --Tom Keogh