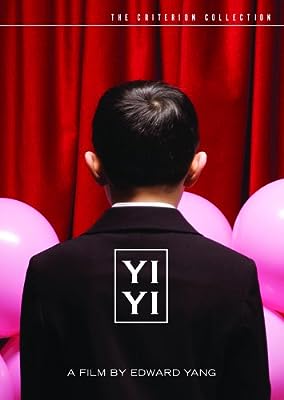 Price: $26.44
Availability: Not Available - stock arriving soon
Buy Now from Amazon
Product Information (more info)
CERTAIN CONTENT THAT APPEARS ON THIS SITE COMES FROM AMAZON SERVICES LLC. THIS CONTENT IS PROVIDED 'AS IS' AND IS SUBJECT TO CHANGE OR REMOVAL AT ANY TIME.

A wedding and a grandmother's illness reveal fault lines in the lives of one Taipei family in Edward Yang's extraordinary film. Yi Yi is built from deceptively simple elements that together create a complex, warm, and utterly convincing portrait of family life. NJ Jian is a businessman facing bankruptcy, but he has to juggle his financial problems with family strife when his mother-in-law falls into a coma. NJ's wife, Min-Min, brings her mother home, and each family member--including daughter Ting-Ting and her delightful little brother Yang-Yang--spends hours talking to the old lady. These conversations become confessionals and the characters gradually re-evaluate their relationships. There are no catastrophic conflicts, only the ordinary, sometimes troubled, unfolding of lives. Yang enhances the film's sense of reality by frequently holding the camera back from the action. The use of long shots and unexpected angles makes it seem like the audience is eavesdropping, catching glimpses of lives passing by. Yi Yi is almost three hours long, but it flies by. Yang is both a consummate, restrained technician and a subtle director of actors. The combination is a magical one. --Simon Leake

On the DVD
The Criterion Collection's newly restored high-definition digital transfer of Edward Yang's Yi Yi is a revelation. The improvement over Fox Lorber's previous DVD release (deeply flawed and rushed into distribution in 2001, and now utterly obsolete) is so dramatic that an entire article was devoted to the subject in the New York Times, explaining the meticulous processes that went into perfecting the new DVD master for Criterion's definitive release. And while the feature-length commentary by writer-director Edward Yang and Asian-cinema critic Tony Rayns may be a bit too low-key for some listeners (because both Yang and Rayns are soft-spoken and not particularly dynamic speakers), attentive listeners will benefit greatly from their back-and-forth conversation. Yang provides in-depth insights into many aspects of Taiwanese cinema in general and Yi Yi in particular, from the hardships of distribution, competition from American films, his casting choices, explanations of specific shots, challenges and "happy accidents" during production, and various details regarding Taiwanese culture, its relation to Chinese and Japanese culture, and the familial traditions that are so affectionately explored in Yi Yi. Rayns is basically on hand to prompt Yang into making directorial observations, or to provide critical insights and observations for Yang to respond to. Both men are genial, intelligent, and articulate, so their commentary is well worth listening to for anyone interested in Asian cinema in a cultural context.

Rayns is featured individually in an informative video interview in which the noted Asian cinema expert explains the historical context which brought about the "New Taiwan Cinema" movement in the early 1980s. He goes into deeper detail about Edward Yang's significance to the movement, along with other important Taiwanese directors such as Hou Hsiao-hsien and Tsai Ming-liang, and examines how Yang's films (especially Yi Yi) are particularly distinctive, notably in their use of urban settings, reflections, and distant, immobile camera angles to emphasize character and behavior. Film Comment editor Kent Jones further elaborates on the qualities of Yi Yi in his enclosed booklet essay (particularly Yang's exquisite use of Taipei locations and his subtle sensitivity to the rhythms of urban living in "a film about grace"). In "Notes from Edward Yang," the director provides additional printed comments about the film's title (which literally translates as "one-one" and means "individually" in Chinese), the challenges of casting, and specific details and milestones in Yi Yi's production schedule. Overall, these details should prove highly useful to western viewers seeking to gain a greater appreciation for Yang's highly regarded masterpiece. --Jeff Shannon