Elevator to the Gallows (The Criterion Collection) 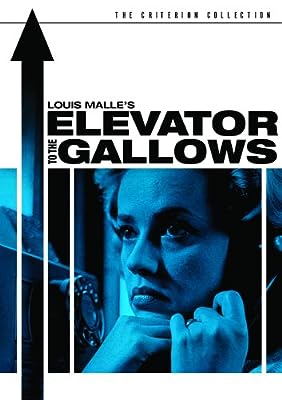 Price: $38.95
Availability: Not Available - stock arriving soon
Buy Now from Amazon
Product Information (more info)
CERTAIN CONTENT THAT APPEARS ON THIS SITE COMES FROM AMAZON SERVICES LLC. THIS CONTENT IS PROVIDED 'AS IS' AND IS SUBJECT TO CHANGE OR REMOVAL AT ANY TIME.

Elevator to the Gallows is many things: A tight, delicious crime thriller; the debut of director Louis Malle (Zazie dans le metro, Atlantic City, Au Revoir, Les Enfants, and many more works of subtle genius); a movie with perhaps the greatest jazz soundtrack of all time, created improvisationally by trumpeter Miles Davis; but above all, Elevator to the Gallows is the blooming of Jeanne Moreau to the status of true movie star, launching her on a career that included Jules & Jim, La notte, and La Femme Nikita. After killing his lover's husband, Julien (Maurice Ronet, Purple Noon) gets trapped in an elevator, forcing him to miss his rendezvous with Florence (Moreau) and allowing his car to be stolen by a joy-riding young couple. From there, the movie splits into three directions: Julien's efforts to escape; Florence wandering the streets, trying not to believe that Julien has abandoned her; and the car thieves, who get caught up in a murder of their own. The movie skillfully fuses Hitchcockian suspense with intimate psychodrama. As she stalks through the night, Moreau is a vision of tortured heartbreak, her woeful eyes and lush, sensuous lips illuminated by neon signs and baleful streetlamps. This is pure cinematic pleasure, visual beauty fused with taut, edge-of-your-seat storytelling.

The Fire Within (The Criterion Collectio...