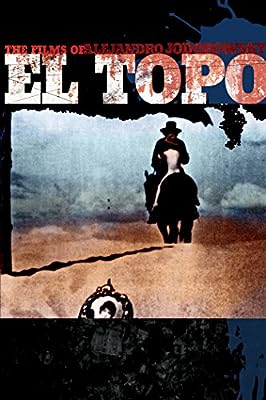 Price: $17.98
As of 2022-10-04 03:55:09 UTC (more info)
Product prices and availability are accurate as of 2022-10-04 03:55:09 UTC and are subject to change. Any price and availability information displayed on http://www.amazon.com/ at the time of purchase will apply to the purchase of this product.
Availability: Not Available - stock arriving soon
Buy Now from Amazon
Product Information (more info)
CERTAIN CONTENT THAT APPEARS ON THIS SITE COMES FROM AMAZON SERVICES LLC. THIS CONTENT IS PROVIDED 'AS IS' AND IS SUBJECT TO CHANGE OR REMOVAL AT ANY TIME.

Classic Americana and avant-garde European cinema sensibilities meet Zen Buddhism and the Bible as master gunfighter and comic mystic EL TOPO (played by writer/director Alejandro Jodorowsky) must defeat his four sharp shooting rivals on an ever increasing bizarre path to allegorical self-enlightenment and surreal resurrection. Released in 1970, Alejandro Jodorowsky's El Topo was the landmark film that began the whole Midnight Movie phenomena of the counterculture crazy 1970's. The film was the most talked about, most controversial quasi-Western head trip ever made, transforming the way risk-taking audiences, seeking mainstream Hollywood alternatives, watched edgy underground films. To say that El Topo became a cult classic is something of an understatement in light of its surprisingly broad acceptance fueled, in part, by ringing endorsements from John Lennon and Yoko Ono that made it a commercial success in its own time.

The Films of Kenneth Anger, Vol. 2