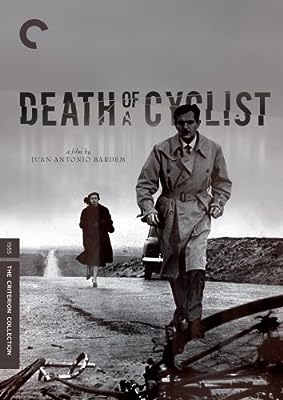 Price: $18.01
As of 2023-02-03 05:28:04 UTC (more info)
Product prices and availability are accurate as of 2023-02-03 05:28:04 UTC and are subject to change. Any price and availability information displayed on http://www.amazon.com/ at the time of purchase will apply to the purchase of this product.
Availability: Not Available - stock arriving soon
Buy Now from Amazon
Product Information (more info)
CERTAIN CONTENT THAT APPEARS ON THIS SITE COMES FROM AMAZON SERVICES LLC. THIS CONTENT IS PROVIDED 'AS IS' AND IS SUBJECT TO CHANGE OR REMOVAL AT ANY TIME.

Upper-class geometry professor Juan and his wealthy married mistress Maria José, driving back from a late-night rendezvous, accidentally hit a cyclist, and run. The resulting, exquisitely shot tale of guilt, infidelity, and blackmail reveals the wide gap between the rich and the poor in Spain, and surveys the corrupt ethics of a society seduced by decadence. Juan Antonio Bardem s charged melodrama Death of a Cyclist (Muerte de un ciclista) was a direct attack on 1950s Spanish society under Franco s rule. Though it was ultimately affected by the dictates of censorship, the film s sting could never be dulled.

Calle Bardem (2005), a documentary on the revolutionary life and career of director Juan Antonio Bardem

PLUS: A booklet featuring an essay by scholar Marsha Kinder and a 1955 essay by Bardem on Spanish cinema

Juan Antonio Bardem's Death of A Cyclist cinematically resembles a noir thriller while it makes a stark political statement against the Spanish government at the time of its conception, namely Franco's regime. Class inequities and distrust thematically color this film, starring Maria Jose (Lucía Bosé), whose insecurities about her infidelity to wealthy businessman, Miguel Castro (Otello Toso), are compounded when she and her illicit love, Juan Soler (Alberto Closas), accidentally hit a bicyclist while driving together. Panicking and leaving the cyclist to die, Juan and Maria are plagued by guilt and fear of discovery. An art critic and friend of Castro's, Rafael Sandoval (Carlos Casaravilla), serves as a corrupt conscience to the secret couple and threatens them with blackmail. Juan and Maria are thrust into his guessing game, in attempts to glean how much Sandoval knows. As Marsha Kinder mentions in her excellent essay accompanying this Criterion Collection release, Bardem's revolt lies not only in the plot and in his efforts to create a "realistic" Spanish film, but also by establishing characters who rebel against conformity—Maria against typical gender roles, and Juan, a liberal but poor Geometry teacher, against his upper-class family's desire for him to grow rich. Landscapes and sets, like the barren desert road where the accident takes place versus the lavish Spanish villa interiors, provide more visual fodder for Bardem's condemnation of power imbalance. Included as an extra is the short documentary, "Calle Bardem," (2005) comprised of interviews with Bardem's friends and colleagues that offer a clearer image of this highly-opinionated auteur. Death of A Cyclist's narrative is juicy in itself but is succeeded by its ambition to revamp Spanish cinema while speaking out against causes the director was dedicated to.--Trinie Dalton