Eclipse Series 2: The Documentaries of Louis Malle (The Criterion Collection) 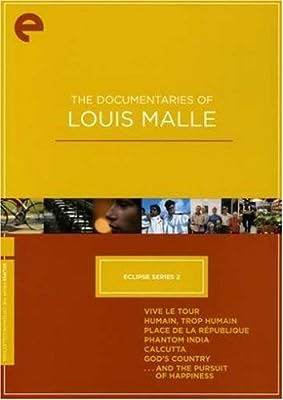 Price: $79.95
As of 2022-10-04 13:56:50 UTC (more info)
Product prices and availability are accurate as of 2022-10-04 13:56:50 UTC and are subject to change. Any price and availability information displayed on http://www.amazon.com/ at the time of purchase will apply to the purchase of this product.
Availability: Not Available - stock arriving soon
Buy Now from Amazon
Product Information (more info)
CERTAIN CONTENT THAT APPEARS ON THIS SITE COMES FROM AMAZON SERVICES LLC. THIS CONTENT IS PROVIDED 'AS IS' AND IS SUBJECT TO CHANGE OR REMOVAL AT ANY TIME.

Over the course of a nearly forty-year career; Louis Malle forged a reputation as one of the world's most versatile cinematic storytellers; with such widely acclaimed; and wide-ranging; masterpieces as Elevator to the Gallows; My Dinner with Andre; and Au revoir les enfants. At the same time; however; with less fanfare; Malle was creating a parallel; even more personal body of work as a documentary filmmaker. With the discerning eye of a true artist and the investigatory skills of a great journalist; Malle takes us from his French homeland to India to the United States; in some of the most engaging and fascinating nonfiction films ever made. Six-Disc Set Includes: Vive Le Tour; Humain; Trop Humain; Place de la Republique An energetic evocation of the Tour de France; a meditative investigation of the inner workings of a French automotive plant; and an entertaining snapshot of the comings and goings on one street corner in Paris - Louis Malle's three French-set documentaries reveal; in an eclectic array of ways; the director's eternal facination with and respect for; the everyday lives of everyday people. Phantom India Malle called his gorgeous and groundbreaking Phantom India the most personal film of his career. And this extraordinary journey to India; originally shown as a miniseries on European television; is infused with his sense of discovery; as well as occasional outrage; intrigue; and joy. Calcutta When he was cutting Phantom India; Malle found that the footage shot in Calcutta was so diverse; intense; and unforgettable that it deserved its own film. The result; released theatrically; is at times shocking - a chaotic portrait of a city engulfed in social and political turmoil; edging ever closer to oblivion. God's Country In 1979; Louis Malle traveled into the heart of Minnesota to capture the everyday lives of the men and women in a prosperous farming community. Six years later; during Ronald Reagan's second term; he returned to find drastic economic decline. Free of stereotypes about America's "heartland;" God's Country; commissioned for American public television; is a stunning work of emotional and political clarity. ...And the Pursuit of Happiness In 1986; Malle; himself a transplant in the United States; set out to investigate the ever widening range of immigrant experience in America. Interviewing a variety of newcomers (from teachers to astronauts to doctors) in middle-and working-class communities from coast to coast; Malle paints a generous; humane portrait of their individual struggles in an increasingly polyglot nation.

Certainly the most underrated of the best-known directors to emerge from the French New Wave of the 1950s, Louis Malle (1932-1995) was also one of the most versatile. Unlike his contemporaries Truffaut, Godard, Rohmer, et al., Malle was born into French nobility (as an heir to the Beghin beet-sugar fortune), which only makes The Documentaries of Louis Malle more remarkable for their compassionate humanism and empathy for the daily struggles of everyday people. Having begun his career as an underwater-camera operator for pioneering ocean explorer Jacques Cousteau, Malle quickly developed a highly personal approach to filmmaking, and after co-directing Cousteau's Oscar-winning documentary The Silent World (1956), he made an auspicious directorial debut with the taut and commercially successful thriller Elevator to the Gallows. And while Malle is best known for such classics as Murmur of the Heart, Atlantic City, My Dinner with Andre and Au Revoir, Les Enfants (in addition being married to Candice Bergen from 1980 until his death), this terrific box set (comprised of seven films on six DVDs) stands as a testament to Malle's uncommon skill as an astutely observant documentarian.

One short and two feature-length documentaries show how Malle's gift for nonfiction filmmaking was fully formed at an early stage. The 1962 short "Vive Le Tour" (19 minutes) is a remarkably intimate look at that year's Tour de France bicycle race, offering a vivid account of the race itself, in addition to the rural French surroundings, rabid fans, and bicyclists in various stages of exhaustion as their endurance test continues. The 72-minute Humain, Trop Humain ("Human, All Too Human," 1973) is a fascinating and pointed experiment in verité style, eschewing narration as Malle's camera probes the numbing routines of dehumanizing labor on the assembly line of a Citroën auto factory. In the middle of the film, Malle offers the stark contrast of eager auto consumers at a Paris motor show, but otherwise this remains a riveting (pardon the pun) look at laborers performing robotic duties, with Malle serving as a subtle admirer of their daily endurance. Malle returned to the subject of working people in Place De La République (1974), a wryly amusing, 95-minute study of a small stretch of sidewalk in a working-class Parisian neighborhood. As Malle interviews various passersby, the film evolves into a penetrating and often humorous examination of the social and personal factors that make people happy or discontent, and a testament to Malle's refined sense of class-conscious curiosity.

In 1969, Malle said he was "fed up with actors, studios, fiction, and Paris" (referring to his battles with Alain Delon during the making of the omnibus film Spirits of the Dead), so he traveled to India with a two-man crew to create his seven-part, 363-minute masterpiece Phantom India. Originally broadcast as a miniseries on French television and financed with Malle's own money, this was the film that Malle considered the most personal of his career. Epic in scope yet intimate in its embrace of India's impoverished majority, it provides what was (in the late '60s) an unprecedented portrait of India's culture--its poverty, caste system, and maddening contradictions. As a companion piece assembled from his vast amount of Indian footage, Malle made Calcutta (99 minutes) to focus on that city's own unique history, personality, and people. Here, Malle trades the slow, contemplative pacing of Phantom India for a more intensely focused examination of the sociopolitical issues that plagued all of India, most conspicuously in its most densely populated city.

After relocating to the United States in 1975 (to direct Pretty Baby), Malle continued to alternate narrative features with documentary projects. The PBS-funded God's Country (89 minutes) was originally broadcast in 1989, and focuses in the close-knit farming community of Glencoe, Minnesota, with 80% of its population of 5,000 comprised of German descendents. Most of the film was shot in 1979, but when it took several years for PBS to finance the editing process, Malle returned to Glencoe in 1985, only to find the farmers (who had welcomed Malle as a curious outsider) struggling in the aftermath of economic recession. Thus, once again, does Malle's work focus on the tenacious survival of working-class people. It's only fitting, then, that the final film in this set (also Malle's final documentary) is titled ...And the Pursuit of Happiness (81 minutes), in which Malle focused on recent immigrants to America including Cambodian refugees, a Pakistani schoolteacher-turned-cosmetics salesperson, an Ethiopian cab-driver, a NASA astronaut from Costa Rica, and many others. Drawing upon his own perspective as an outsider in America, Malle continued to express his uncommon empathy for people in various stages of adjustment or displacement.

As the reasonably priced "Series 2" release of the Eclipse division of the Criterion Collection, The Documentaries of Louis Malle does not include any supplemental materials aside from well-written liner notes, but the superiority of these films speaks for itself. If it wasn't obvious before, it's now quite clear that Louis Malle ranked highly among the most accomplished documentary filmmakers of the 20th century. --Jeff Shannon

The Lovers (The Criterion Collection)