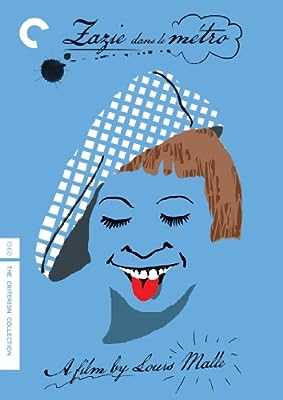 Price: $24.00
As of 2021-10-23 14:42:25 UTC (more info)
Product prices and availability are accurate as of 2021-10-23 14:42:25 UTC and are subject to change. Any price and availability information displayed on http://www.amazon.com/ at the time of purchase will apply to the purchase of this product.
Availability: Not Available - stock arriving soon
Buy Now from Amazon
Product Information (more info)
CERTAIN CONTENT THAT APPEARS ON THIS SITE COMES FROM AMAZON SERVICES LLC. THIS CONTENT IS PROVIDED 'AS IS' AND IS SUBJECT TO CHANGE OR REMOVAL AT ANY TIME.

A brash and precocious eleven-year-old (Catherine Demongeot) comes to Paris for a whirlwind weekend with her rakish uncle (La Pointe Courte’s, Philippe Noiret); he and the viewer get more than they bargained for in this anarchic comedy from Louis Malle (Murmur of the Heart, My Dinner with André), which treats the City of Light as though it were a pleasure island just waiting to be destroyed. Based on a popular novel by Raymond Queneau that had been considered unadaptable, Malle’s audacious hit Zazie dans le métro is a bit of stream-of-conscious slapstick, wall-to-wall with visual gags, editing tricks, and effects, and made with flair on the cusp of the French New Wave.

Louis Malle's Zazie dans le métro is a delightful splash of slapstick and silliness, set against the dense background of Paris as if the City of Light were simply the best vaudeville stage ever constructed. The young star Catherine Demongeot is a madcap Zazie, a willful, mouthy country kid who's in Paris to visit with her reluctant Uncle Gabriel (a properly befuddled Philippe Noiret). Zazie's sole goal for her visit to Paris? Riding the famed métro, naturellement. That is pretty much the plot of Zazie--yet what Malle, Demongeot, and Malle's talented crew do with that wisp of a concept is brilliant, and owes more to the best films of, say, Harold Lloyd, than to the French New Wave.

The adults in Zazie are always just two steps behind the little dynamo as she zips around the city, leaving good-natured chaos in her wake. This new Criterion disc is a wonderful addition to any film-lover's collection, for Zazie dans le métro itself is restored to show the brilliance of cinematographer Henri Raichi and the splendid set design that makes the streets of Paris, just below its breathtaking landmarks, a pastiche of early '60s cubist colors. Not to be missed is the documentary interview with assistant director Philippe Collin, Le Paris de Zazie, in which Collin recalls the installation around the city of graphic, and graphically dramatic, panels in the background that tie Zazie dans the métro together with energy and pizazz. Or maybe that should be pizazie. --A.T. Hurley