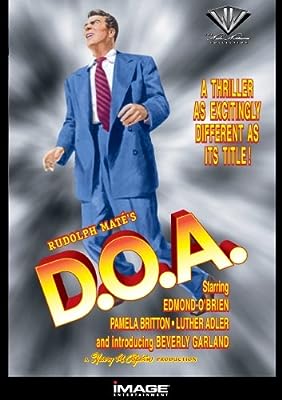 Price: $59.99
As of 2022-11-27 09:01:32 UTC (more info)
Product prices and availability are accurate as of 2022-11-27 09:01:32 UTC and are subject to change. Any price and availability information displayed on http://www.amazon.com/ at the time of purchase will apply to the purchase of this product.
Availability: Not Available - stock arriving soon
Buy Now from Amazon
Product Information (more info)
CERTAIN CONTENT THAT APPEARS ON THIS SITE COMES FROM AMAZON SERVICES LLC. THIS CONTENT IS PROVIDED 'AS IS' AND IS SUBJECT TO CHANGE OR REMOVAL AT ANY TIME.

Frank Bigelow, an L.A. accountant, takes a vacation to San Francisco to relax and womanize for a few days when he is slipped a slow-acting poison for which there is no antidote. The doctor's prognosis: He has forty-eight hours to live. Forty-eight hours t

A faceless figure marches down an endless hallway as dark, driving music underscores his doom. It's stocky, stalwart Edmond O'Brien, who plows through the police detective's office like he's got nothing to lose. "I want to report a murder," he demands, grim and sleepy-eyed. Who was killed? "I was." It's a brilliant opening to a memorable film noir classic. O'Brien is a CPA who flees his dull job and small California town for a wild weekend in San Francisco, only to be poisoned and doomed to certain death. With only days to live, his incredulity morphs into a searing drive to find his killers and stinging regrets for what might have been. O'Brien is a familiar noir face, but he usually plays figures of authority: a cop in White Heat; an investigator in The Killers. He's a little stiff here, but his blunt, unglamorous persona is perfect for the Everyman who is randomly visited by death. Rudolph Maté, a cinematographer turned director, moves from sun-bright day scenes to busy nighttime locations with few visual flourishes, but when he takes the camera into the streets of Los Angeles and San Francisco the film is energized with a gritty, restless vigor. It's one of the most relentlessly dark films noir ever made--taut, edgy, and low budget. Watch for the Bradbury building in the film's climax, made famous by its memorable use decades later in the sci-fi noir classic Blade Runner. --Sean Axmaker