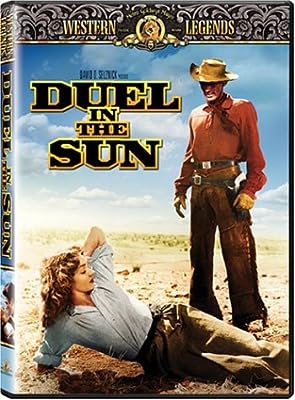 Price: $14.98
As of 2022-12-09 10:08:09 UTC (more info)
Product prices and availability are accurate as of 2022-12-09 10:08:09 UTC and are subject to change. Any price and availability information displayed on http://www.amazon.com/ at the time of purchase will apply to the purchase of this product.
Availability: Not Available - stock arriving soon
Buy Now from Amazon
Product Information (more info)
CERTAIN CONTENT THAT APPEARS ON THIS SITE COMES FROM AMAZON SERVICES LLC. THIS CONTENT IS PROVIDED 'AS IS' AND IS SUBJECT TO CHANGE OR REMOVAL AT ANY TIME.

From the acclaimed producer of Gone With the Wind comes a torrid tale of passion and romancethat's loaded with "all the sweep and panache of a giant American action movie" (The New Yorker)! "Flawlessly cast" (The Film Daily) with a bevy of film legends, including Jennifer Jones, Gregory Peck, Joseph Cotten, Lionel Barrymore and Lillian Gish, this salacious saga is "virtuallyimpossible not to love" (The Hollywood Reporter)! When her father is hanged for murdering his wife, the stunning beauty Pearl (Jones) is taken in by a wealthy Texan, his wife and their two grown sons (Peck and Cotten). But Pearl soon becomes trapped in an emotional tug-of-war between her love for one son and her lust for the other, igniting the most tempestuous triangle the West has ever seen!