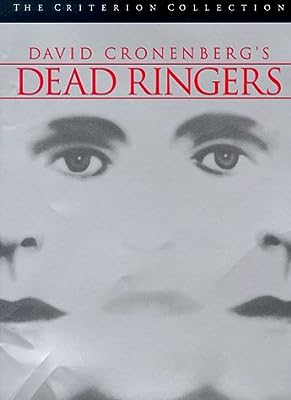 Price: $74.98
As of 2022-10-04 19:04:26 UTC (more info)
Product prices and availability are accurate as of 2022-10-04 19:04:26 UTC and are subject to change. Any price and availability information displayed on http://www.amazon.com/ at the time of purchase will apply to the purchase of this product.
Availability: Not Available - stock arriving soon
Buy Now from Amazon
Product Information (more info)
CERTAIN CONTENT THAT APPEARS ON THIS SITE COMES FROM AMAZON SERVICES LLC. THIS CONTENT IS PROVIDED 'AS IS' AND IS SUBJECT TO CHANGE OR REMOVAL AT ANY TIME.

In Dead Ringers, David Cronenberg tells the chilling story of identical twin gynecologists-suave Elliot and sensitive Beverly, bipolar sides of one personality-who share the same practice, the same apartment, the same women. When a new patient, glamorous actress Claire Niveau, challenges their eerie bond, they descend into a whirlpool of sexual confusion, drugs, and madness. Jeremy Irons' tour-de-force performance-as both twins-raises disturbing questions about the nature of personal identity.

Like many other films by Canadian director David Cronenberg (especially Crash), Dead Ringers presents the cinematic and psychological equivalent of an automobile accident--you dare not look, but you can't turn away. The film marked a directorial breakthrough for Cronenberg, who was able to continue some of the themes explored in his earlier horror films while graduating to a higher, more critically "respectable" level of artistic sophistication. The film is loosely based, amazingly enough, on a true story about twin gynecologists who routinely traded each others' identities, lives and even lovers. Utilizing innovative split-screen technology (years before computer manipulation made such trickery much easier), the film stars Jeremy Irons in flawless dual roles as the identical brothers Beverly and Elliot Mantle. Their ability to instantly switch identities leads them to a shared relationship with a well-known actress (Genevieve Bujold) and, ultimately, a physical and psychological tailspin that sends them both to the brink of madness and death. The scenario suggests that both men are halves of a whole, and that one cannot exist without the other. But when Beverly pursues a kinky, drug-addicted affair with the actress, his more self-controlled brother is helpless to prevent their mutual decline. In this way Dead Ringers becomes a fascinating and stylistically clinical study of duality, and Cronenberg doesn't shy away from the dark and unpleasant aspects of the story. (One look at the movie's display of bizarre gynecological instruments and you'll know why women find this film particularly--and unforgettably--disturbing.) --Jeff Shannon