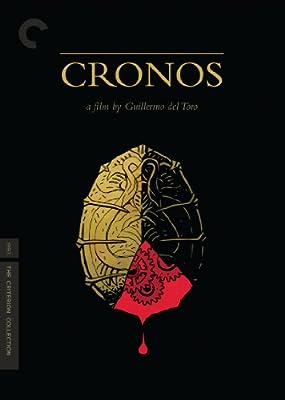 Price: $18.01
As of 2023-02-06 02:44:45 UTC (more info)
Product prices and availability are accurate as of 2023-02-06 02:44:45 UTC and are subject to change. Any price and availability information displayed on http://www.amazon.com/ at the time of purchase will apply to the purchase of this product.
Availability: Not Available - stock arriving soon
Buy Now from Amazon
Product Information (more info)
CERTAIN CONTENT THAT APPEARS ON THIS SITE COMES FROM AMAZON SERVICES LLC. THIS CONTENT IS PROVIDED 'AS IS' AND IS SUBJECT TO CHANGE OR REMOVAL AT ANY TIME.

Guillermo del Toro (Hellboy, Pan’s Labyrinth) made an auspicious, audacious feature debut with CRONOS, a highly unorthodox tale about the seductiveness of the idea of immortality. Kindly antiques dealer Jesús Gris (Federico Luppi) happens upon an ancient golden device in the shape of a scarab, and soon finds himself possessor and victim of its sinister, addictive powers, as well as the target of a mysterious, crude American named Angel (a delightfully deranged Ron Perlman [Hellboy]). Featuring marvelous special makeup effects and the unforgettably haunting imagery for which del Toro has become world-renowned, CRONOS is a visually rich and emotionally captivating dark fantasy.

Guillermo del Toro's facility with baroque visuals, gothic horror, and black comedy comes to the fore in his first feature (his affection for creepy-crawlies also anticipates the underrated Mimic). A 16th-century prologue reveals the origins of the scarab-shaped Cronos device, which allowed a Spanish alchemist to expand his lifetime by several centuries. In the present day, Mexican antiquities dealer Jesús Gris (Federico Luppi, who reunited with del Toro for The Devil's Backbone) dotes on his unflappable granddaughter, Aurora (Tamara Shanath). When the device ends up in Gris's shop, he tangles with the petulant Angel (Hellboy's Ron Perlman), whose critically ill uncle, Dieter (Claudio Brook, Exterminating Angel), longs to purchase the relic, but Gris isn't selling. After the mechanism stings the merchant, he feels more youthful, and becomes addicted to the sensation. His newfound taste for blood, however, only increases after he morphs into a nocturnal creature, much like Mimic's man-sized cockroach. With Cronos, del Toro created a unique vampire-zombie hybrid, since Gris's resistance to age blooms just as his flesh starts to wither. In an excellent commentary track, he describes the movie as a reinvention of the vampire myth in alchemical terms. Other extras include commentary from the producers, a gory student short, a tour of the director's amazing offices, interviews with cast and crew (including Luppi and Perlman), a stills gallery (including family photographs), and an essay by film critic Maitland McDonagh, who praises del Toro as a filmmaker with an eye "attuned to the beauty in the darkness." --Kathleen C. Fennessy