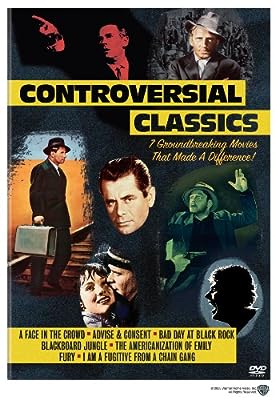 Price: $79.92
As of 2022-11-27 19:33:11 UTC (more info)
Product prices and availability are accurate as of 2022-11-27 19:33:11 UTC and are subject to change. Any price and availability information displayed on http://www.amazon.com/ at the time of purchase will apply to the purchase of this product.
Availability: Not Available - stock arriving soon
Buy Now from Amazon
Product Information (more info)
CERTAIN CONTENT THAT APPEARS ON THIS SITE COMES FROM AMAZON SERVICES LLC. THIS CONTENT IS PROVIDED 'AS IS' AND IS SUBJECT TO CHANGE OR REMOVAL AT ANY TIME.

Otto Preminger expanded his vision in the 1960s with a whole series of ambitious, expansive dramas with huge casts and big themes. Advise and Consent (1962), an examination of deal making, party politics, and congressional diplomacy in Washington's legislative halls (based on the novel by Allen Drury), is one of his best. Preminger broke the blacklist with his previous film, Exodus, and it rings through in this drama about a controversial nominee for secretary of state (a confident, stately Henry Fonda) accused of being a Communist. The nomination process becomes the center ring of the political circus, with fidgety accuser Burgess Meredith in the spotlight; devious, silver-tongued Charles Laughton cracking the whip as a southern senator with a grudge against Fonda; and party whip Walter Pidgeon lining up votes behind the scenes. Arm twisting and diplomatic hardball turns to perjury and blackmail, and a melodramatic twist gives this lesson in party politics a salacious soap opera dimension.

With The Americanization of Emily (1964), screenwriter Paddy Chayefsky (Marty) sinks his satirical fangs into a story of an American naval officer (James Garner) selected to be the first victim at the invasion of Normandy. Julie Andrews plays a prim, British war widow who falls for him. Cynical in tone, the story becomes an interesting collision of manipulative interests and renewed life, the same formula that worked so well in Chayefsky's scripts for Network and Hospital.

One of the first Hollywood films to deal openly with white racism toward Japanese Americans during World War II, Bad Day at Black Rock (1955) (directed by action maestro John Sturges, The Great Escape) stars Spencer Tracy as a one-armed stranger named MacReedy, who arrives in the tiny town of Black Rock on a hot day in 1945. Seeking a hotel room and the whereabouts of an ethnic Japanese farmer named Komoko, MacReedy runs smack into a wall of hostility that escalates into serious threats. In time it becomes apparent that Komoko has been murdered by a local, racist chieftain, Reno Smith (Robert Ryan), who also plans on dispensing with MacReedy. Tracy's hero is forced to fight his way past Smith's goons (among them Ernest Borgnine and Lee Marvin) and sundry allies (Anne Francis) to keep alive, setting the stage for memorable suspense crisply orchestrated by Sturges. Casting is the film's principal strength, however: Tracy, the indispensable icon of integrity, and Ryan, the indispensable noir image of spiritual blight, are as creatively unlikely a pairing as Sturges's shotgun marriage of Yul Brynner and Steve McQueen in The Magnificent Seven.

Novelist Evan Hunter burst America's postwar bubble when he described an inner-city school terrorized by switchblade-wielding juvenile delinquents. Director-screenwriter Richard Brooks's 1955 adaptation of Blackboard Jungle still packs a tremendous wallop (even if it was shot mostly on the back lot). A forerunner of Rebel Without a Cause and West Side Story, this black-and-white classic--set to Bill Haley and His Comets' "Rock Around the Clock"--is part exposé, part melodrama, part public-service announcement. Glenn Ford, at his slow-to-rile best, plays Richard Dadier, an incoming English teacher at North Manual High School. An idealist who knows how to handle himself in a dark alley, Dadier stands his ground and earns the begrudging respect of school thugs led by Vic Morrow and Sidney Poitier. Anne Francis plays Ford's especially vulnerable wife; Richard Kiley is the timid math teacher with the priceless jazz-record collection; Louis Calhern and John Hoyt are among the more cynical North Manual High veterans. See if you can ID Jamie Farr and director Paul Mazursky as gang members. The film was nominated for four Oscars.

More timely now, perhaps, than when it was first released in 1957, Elia Kazan's overheated political melodrama Face in the Crowd explores the dangerous manipulative power of pop culture. It exposes the underside of Capra-corn populism, as exemplified in the optimistic fable of grassroots punditry Meet John Doe. In Kazan's account, scripted by Budd Schulberg, the common-man pontificator (Andy Griffith) is no Gary Cooper-style aw-shucks paragon. Promoted to national fame as a folksy TV idol by radio producer Patricia Neal, Griffith's Larry "Lonesome" Rhodes turns out to be a megalomaniacal rat bastard. The film turns apocalyptic as Rhodes exploits his power to sway the masses, helping to elect a reactionary presidential candidate. The parodies of television commercials and opinion polling were cutting edge in their day (Face in the Crowd was the Network of the Eisenhower era), and there are some startling, near-documentary sequences shot on location in Arkansas. An extraordinary supporting cast (led by Walter Matthau and Lee Remick) helps keep the energy level high, even when the satire turns shrill and unpersuasive in the final reel.

Fury is tough stuff from director Fritz Lang (M), making his first American film with this 1936 story of an innocent man (Spencer Tracy) who escapes a lynch mob and then orchestrates his apparent murder at their hands. Tracy is superb, and the film is uncompromising, until studio interference takes some of the wind out of Lang's sails right at the end. But as the portrait of a character who comes to reflect the destiny he is trying to avoid, this is still essential Lang and a pre-noir classic.

I Am a Fugitive from a Chain Gang (1932) is one of the toughest and most uncompromising movies to ever come out of Hollywood. Paul Muni stars as a regular Joe, just back from World War I, who is unjustly convicted of a crime and sentenced to 10 years of bruisingly unfair treatment on a chain gang. Even a successful escape can't shake the spectre of the chains, nor the amazingly fatalistic twists the screenplay has in store. This picture could only have been made at Warner Bros., where social-justice movies flourished in the 1930s and criticism of judicial systems and prisons was sanctioned. Muni's weird acting style (he was recently off Scarface) somehow fits the film's furious tone, and director Mervyn LeRoy--as in his earlier Little Caesar--was dexterous enough to build the action to an unforgettable ending. It's a film that filters the American Dream through Depression realities and noirish pessimism (with a streak of pre-Code sexual frankness--note the one-night "friend" Muni makes the night of his escape). This one holds up, folks; it's a stunner.