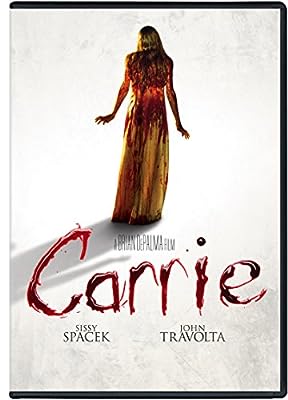 Price: $7.99
As of 2023-02-04 05:11:19 UTC (more info)
Product prices and availability are accurate as of 2023-02-04 05:11:19 UTC and are subject to change. Any price and availability information displayed on http://www.amazon.com/ at the time of purchase will apply to the purchase of this product.
Availability: Not Available - stock arriving soon
Buy Now from Amazon
Product Information (more info)
CERTAIN CONTENT THAT APPEARS ON THIS SITE COMES FROM AMAZON SERVICES LLC. THIS CONTENT IS PROVIDED 'AS IS' AND IS SUBJECT TO CHANGE OR REMOVAL AT ANY TIME.

Based on the best-selling Stephen King novel, Carrie "catches the mind, shakes it and refuses to let it go" (Time)! Starring Sissy Spacek and Piper Laurie (in OscarÂ(r)-nominated* performances), John Travolta and Amy Irving, this ultimate revenge fantasy is "absolutely spellbinding" (Roger Ebert), "outrageously witty" (Los Angeles Times) and one of the all-time great horror classics! At the center of the terror is Carrie (Spacek), a tortured high-school misfit with no confidence, no friends...and no idea about the extent of her secret powers of telekinesis. But when her psychotic mother and sadistic classmates finally go too far, the once-shy teen becomes an unrestrained, vengeance-seeking powerhouse who, with the help of her 'special gift,' causes all hell to break loose in a famed cinematic frenzy of blood, fire and brimstone! *1976: Spacek, Actress; Laurie, Supporting Actress

Chronicle of a Summer (Criterion Collect...