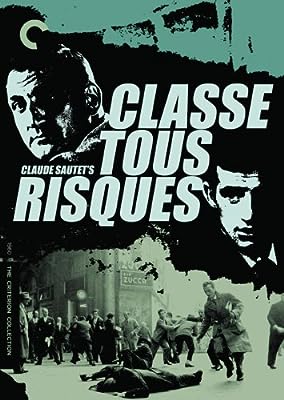 Price: $22.99
As of 2023-02-06 06:30:39 UTC (more info)
Product prices and availability are accurate as of 2023-02-06 06:30:39 UTC and are subject to change. Any price and availability information displayed on http://www.amazon.com/ at the time of purchase will apply to the purchase of this product.
Availability: Not Available - stock arriving soon
Buy Now from Amazon
Product Information (more info)
CERTAIN CONTENT THAT APPEARS ON THIS SITE COMES FROM AMAZON SERVICES LLC. THIS CONTENT IS PROVIDED 'AS IS' AND IS SUBJECT TO CHANGE OR REMOVAL AT ANY TIME.

For the sake of his family, a criminal on the lam gives himself up.

Claude Sautet's neo-realist Classe Tous Risques (loosely translated as "all-risk insurance") deserves the kind of acclaim accorded classic American noirs, like They Live by Night. As with Nicholas Ray before him, the Frenchman behind the exquisitely restrained chamber pieces Un Coeur en Hiver and Nelly et Monsieur Arnaud combines genre tropes with tenderness. It's a tricky balance, and far too many filmmakers succumb to pathos when making the attempt. Milan-based gangster Abel Davos (former wrestler Lino Ventura, Jean-Pierre Melville's Army of Shadows) won't hesitate to plug a foe, but dotes on his two sons, wife Therese (Simone France), and partner Raymond (Stan Krol). When a robbery goes bad, however, several of those nearest and dearest to Davos lose their lives. In swoops ex-boxer Eric Stark (Jean-Paul Belmondo, just off Breathless) who helps him escape to Paris--by ambulance. Damsel-in-distress Liliane (8 1/2's Sandra Milo) joins the duo on their dangerous journey. Round Midnight's Bertrand Tavernier describes the matter-of-fact ending as "abrupt, unsentimental, and poignant." Written by ex-con José Giovanni (Le Trou) and shot by Ghislain Cloquet (Mouchette), Sautet's first feature, after assisting Georges Franju and Jacques Becker, got lost amidst the French New Wave. It may not surpass Melville for cool, but rivals him in the hood-with-heart department (and Melville greatly admired the film). Supplements include the French and US trailers, interviews with Giovanni and Tavernier from the 2000 documentary Claude Sautet ou la Magie Invisible, and comments from Ventura, circa 1959-1987 about the movie and his career. --Kathleen C. Fennessy