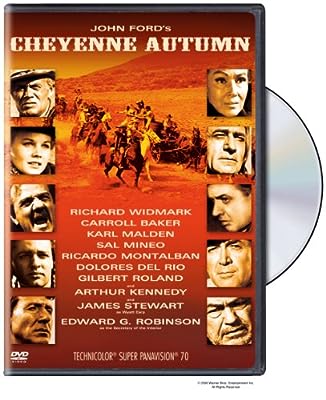 Price: $12.59
As of 2022-08-18 21:29:26 UTC (more info)
Product prices and availability are accurate as of 2022-08-18 21:29:26 UTC and are subject to change. Any price and availability information displayed on http://www.amazon.com/ at the time of purchase will apply to the purchase of this product.
Availability: Not Available - stock arriving soon
Buy Now from Amazon
Product Information (more info)
CERTAIN CONTENT THAT APPEARS ON THIS SITE COMES FROM AMAZON SERVICES LLC. THIS CONTENT IS PROVIDED 'AS IS' AND IS SUBJECT TO CHANGE OR REMOVAL AT ANY TIME.

Four-time Academy Award-winner John Ford (The Grapes of Wrath, The Quiet Man) directs an epic frontier film--Cheyenne Autumn.Imprisoned on a squalid reservation in Oklahoma, the last of the Cheyenne Indians escape and head for their old homelands in Wyoming, accompanied by Quaker missionary Deborah Wright (Carroll Baker). Captain Thomas Archer (Richard Widmark) is ordered to lead his cavalry unit in pursuit--despite his sympathy for the Cheyenne and his love for Deborah. The inevitable clash between soldiers and Indians ends in a crushing defeat for Archer's men but brings even more troops against the outnumbered Indians.Hollywood luminaries James Stewart, Karl Malden and Edward G. Robinson add their star power to this profound and passionate Western.

Cheyenne Autumn is a beautiful title to grace John Ford's final Western, an earnest attempt at long last to "tell the story from the Indians' point of view." The film has moments of grandeur, thanks especially to William H. Clothier's majestic Technicolor compositions--restored to their proper Panavision dimensions on the DVD release--and moments of graceful action thanks to that peerless horseman, Ben Johnson. In other respects, the film falls short of the occasion. Ford is unambiguously supportive of the Cheyennes' resolve to bolt their assigned reservation in the desert Southwest and trek north to their ancestral lands. By emphatic contrast, most of white society, the military, the bureaucracy, and the sensationalist press are portrayed as insensitive, foolish, or downright hateful. Unfortunately, the Cheyenne are nobly wooden and, apart from some Navajo extras, played by non-Indians: Ricardo Montalban, Gilbert Roland, Sal Mineo, Victor Jory (who's pretty magnificent, actually), and Dolores Del Rio (who's breathtakingly beautiful as ever). As for point of view, it's sympathetic cavalry officer Richard Widmark and Quaker missionary Carroll Baker through whose eyes most of the epic narrative unfolds. A scabrous Dodge City interlude in midfilm, featuring James Stewart as a thoroughly disreputable Wyatt Earp (as opposed to the noble figure Henry Fonda played in My Darling Clementine), was chopped in half after the New York roadshow opening in 1964; it's all there on the DVD. Add to the list of sympathetic whites U.S. Secretary of the Interior Carl Schurz, played by Edward G. Robinson, who replaced an ailing Spencer Tracy. --Richard T. Jameson