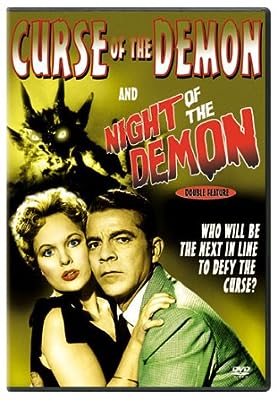 Price: $9.99
As of 2022-10-02 19:15:00 UTC (more info)
Product prices and availability are accurate as of 2022-10-02 19:15:00 UTC and are subject to change. Any price and availability information displayed on http://www.amazon.com/ at the time of purchase will apply to the purchase of this product.
Availability: Not Available - stock arriving soon
Buy Now from Amazon
Product Information (more info)
CERTAIN CONTENT THAT APPEARS ON THIS SITE COMES FROM AMAZON SERVICES LLC. THIS CONTENT IS PROVIDED 'AS IS' AND IS SUBJECT TO CHANGE OR REMOVAL AT ANY TIME.

When psychologist John (Dana Andrews) Holden's full original length. Plus, catch the rare truncated American release back to back. A British production, NIGHT OF THE DEMON was released in the UK in a 95 minute running time. For the American market, the film was cut to 82 minutes, re-titled CURSE OF THE DEMON, and released in 1958. This DVD presents, for the first time in the US, the fully restored 95-minute version as seen by British audiences in 1957, as well as the rare, truncated American release.

After establishing his signature style with such moody classics as Cat People and I Walked with a Zombie, Jacques Tourneur returned to peak form with the first-rate supernatural thriller Curse of the Demon. It's a horror-noir set in England, adapted from the M.R. James story "Casting the Runes" and built around the ominous notion that black arts--particularly the use of ancient runic symbols--can summon a deadly beast from hell. Dana Andrews is the stubborn American skeptic, determined to debunk a genteel occultist (Niall MacGinnis) whose evil powers are ultimately incontestable. The briefly seen demon may be cheesy by latter-day standards, but its nightmarish appearance--and Tourneur's masterful use of subtle suggestion, threatening atmosphere, and eerie special effects--make Curse of the Demon one of the best horror films of the 1950s. This splendid DVD offers the longer British version Night of the Demon for film-buff comparison; it's essentially the same film with a few extended scenes. Both are highly recommended. --Jeff Shannon

Cul-de-sac (The Criterion Collection) [B...