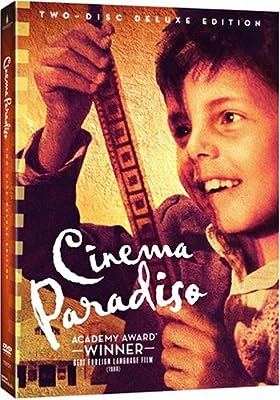 Price: $14.95
As of 2023-01-31 12:45:51 UTC (more info)
Product prices and availability are accurate as of 2023-01-31 12:45:51 UTC and are subject to change. Any price and availability information displayed on http://www.amazon.com/ at the time of purchase will apply to the purchase of this product.
Availability: Not Available - stock arriving soon
Buy Now from Amazon
Product Information (more info)
CERTAIN CONTENT THAT APPEARS ON THIS SITE COMES FROM AMAZON SERVICES LLC. THIS CONTENT IS PROVIDED 'AS IS' AND IS SUBJECT TO CHANGE OR REMOVAL AT ANY TIME.

Cinema Paradiso's complex, interwoven tales of wartime Italy, a boy's coming of age, and the history of cinema can be viewed in their entirety on the Director's Cut included in this Deluxe Edition. Director Giuseppe Tornatore's additional 50 minutes of footage provides closure for the saga's detailing Alfredo's death, and Salvatore Di Vita's lost relationship with his teenage love, Elena. Most of the 50 minutes serves as a continuation of the story, rather than as previously deleted scenes. The original, already celebrated Cinema Paradiso follows Toto (Jacques Perrin), a Sicilian boy who persuades the town projectionist, Alfredo (Philippe Noiret), to teach him how to show films. Spanning nearly 50 years, the film craftily draws parallels between Toto's life and those lives he sees on screen. As Toto matures into Salvatore, a successful Italian filmmaker, the Cinema Paradiso ages as well. Salvatore's return home for Alfredo's funeral is also a goodbye to his Paradiso, demolished to become a parking lot. The film's heightened sense of nostalgia subtly mirrors our humanistic love of movies, making it a tribute to cinema as an artistic genre. The Director's Cut can be fulfilling if one felt unsatisfied by the more ambiguous ending of the theatrical release, but it also feels slightly overwrought. Two documentaries in this package feature fans and critics praising Cinema Paradiso, proving its endurance as a classic. However, as Salvatore discovers over the course of the film, there is no need to improve a masterpiece. --Trinie Dalton