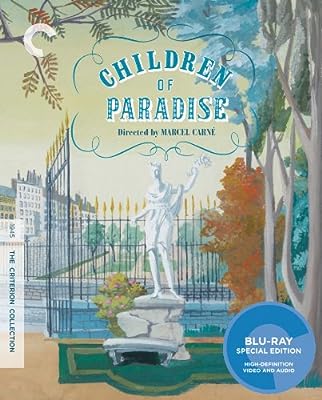 Price: $27.99
As of 2021-10-23 15:14:26 UTC (more info)
Product prices and availability are accurate as of 2021-10-23 15:14:26 UTC and are subject to change. Any price and availability information displayed on http://www.amazon.com/ at the time of purchase will apply to the purchase of this product.
Availability: Not Available - stock arriving soon
Buy Now from Amazon
Product Information (more info)
CERTAIN CONTENT THAT APPEARS ON THIS SITE COMES FROM AMAZON SERVICES LLC. THIS CONTENT IS PROVIDED 'AS IS' AND IS SUBJECT TO CHANGE OR REMOVAL AT ANY TIME.

Marcel Carne's three hour romantic epic Children of Paradise swept audiences back to the 1920's as it was described in the American trailer as the French answer to 'Gone With the Wind,' becoming one of the most expensive French films ever made at the time. It painted a detailed world obsessed with both theater and crime, and presented a vast portrait of sophisticated and cynical portrait of actors, swindlers, murderers, prostitutes, pickpockets, impresarios, along with the decadent rich inhabiting a setting of nightclubs, theaters, dives and the hiding places of the unsavory. Legendary director François Truffaut once stated, "'I would give up all my films to have directed Children of Paradise." The original screenplay by Jacques Prevert drew historical inspiration from such colorful personalities of its period as Jean-Gaspard Deburau, the innovative mime; Pierre-Francois Lacenaire, a murderer who went to the scaffold; and Frederick Lemaitre, a celebrated actor for whom both Alexandre Dumas and Victor Hugo wrote plays; As all four leading men who revolve around the arousal and envious beauty of the fictional and charismatic courtesan.

Poetic realism reached sublime heights with Children of Paradise (Les enfants du paradis), widely considered one of the greatest French films of all time. This nimble depiction of nineteenth-century Paris’s theatrical demimonde, filmed during World War II, follows a mysterious woman (The Pearls of the Crown’s Arletty) loved by four different men (all based on historical figures): an actor, a criminal, a count, and, most poignantly, a street mime (La ronde’s Jean-Louis Barrault, in a longing-suffused performance for the ages). With sensitivity and dramatic élan, director Marcel Carné (Port of Shadows) and screenwriter Jacques Prévert (Le jour se lève) resurrect a world teeming with hucksters and aristocrats, thieves and courtesans, pimps and seers. Thanks to a major new restoration, this iconic classic looks and sounds richer and more detailed than ever.

Never has a film been through so many disruptions or dealt with as many issues as Marcel Carne's French epic masterpiece Children of Paradise; and it actually getting completed was a miracle of its own. It was shot in Paris during the Nazi Occupation and somehow survived several power failures, damaging storms, audacious spending, curfews and a shortage of film stock. During the film-making process the sets had to be moved between two cities and because its designer and composer was Jewish he had to continually work from hiding. While Carne was harassed by the German Occupation he was forced to hire pro-Nazi collaborators as extras for the film, and interestingly throughout the whole production the Nazi collaborators had no idea they were working next to resistance fighters. Carne was also plagued with budgetary woes and was forced to make the film no longer than an hour and thirty minutes, so he simply made two separate films because he was confident he would eventually show them together as one 3 hour film after the war ended. After the liberation the film finally opened in Paris for 54 weeks in March of 1945 and it is said that the film plays somewhere in Paris every single day.