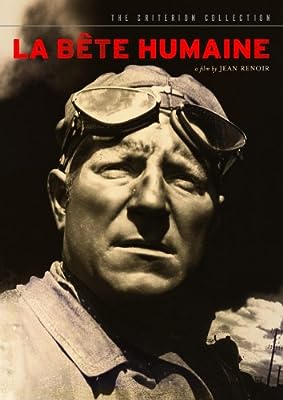 Price: $29.95
As of 2021-10-23 13:55:15 UTC (more info)
Product prices and availability are accurate as of 2021-10-23 13:55:15 UTC and are subject to change. Any price and availability information displayed on http://www.amazon.com/ at the time of purchase will apply to the purchase of this product.
Availability: Not Available - stock arriving soon
Buy Now from Amazon
Product Information (more info)
CERTAIN CONTENT THAT APPEARS ON THIS SITE COMES FROM AMAZON SERVICES LLC. THIS CONTENT IS PROVIDED 'AS IS' AND IS SUBJECT TO CHANGE OR REMOVAL AT ANY TIME.

Based on the classic Emile Zola novel, Jean Renoir's La bete humaine was one of the legendary director's greatest popular successes, tapping into the fatalism of a nation in despair. Jean Gabin's emblematic portrayal of doomed train engineer Jacques Lantier granted him a permanent place in the hearts of his countrymen. Part poetic realism, part film noir, the film is a hard-boiled and suspenseful journey into the tormented psyche of a workingman. SPECIAL FEATURES: New, restored high-definition digital transfer of the original uncut version. Introduction to the film by Jean Renoir. New interview with director Peter Bogdanovich. Archival interviews with Renoir discussing his adaptation of Emile Zola's novels, his process with actors, and directing actress Simone Simon. Gallery of on-set photographs and theatrical posters. Theatrical trailer. New and improved English subtitle translation. A booklet featuring writings by film critic Geoffrey O'Brien, historian Ginette Vincendeau, and production designer Eugene Lourie.