Carnival of Souls (The Criterion Collection) 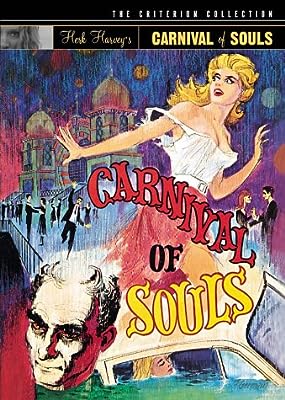 Price: $23.93
As of 2023-02-04 10:25:16 UTC (more info)
Product prices and availability are accurate as of 2023-02-04 10:25:16 UTC and are subject to change. Any price and availability information displayed on http://www.amazon.com/ at the time of purchase will apply to the purchase of this product.
Availability: Not Available - stock arriving soon
Buy Now from Amazon
Product Information (more info)
CERTAIN CONTENT THAT APPEARS ON THIS SITE COMES FROM AMAZON SERVICES LLC. THIS CONTENT IS PROVIDED 'AS IS' AND IS SUBJECT TO CHANGE OR REMOVAL AT ANY TIME.

Mary Henry (Candace Hilligoss) survives a drag race in a rural Kansas town, then takes a job as a church organist in Salt Lake City. En route, she becomes haunted by a bizarre apparition that compels her to an abandoned lakeside pavillion. Herk Harvey's macabre masterpiece gained a cult following on late night television and has been bootlegged for years. Made by industrial filmmakers on a modest budget, "Carnival of Souls" was intended to have the "look of a Bergman" and "feel of a Cocteau," and succeeds with its strikingly-used locations and spooky organ score.

An ultra-cheap B-horror movie, filmed in Lawrence, Kansas, in 1962, with a really creepy Twilight Zone-style premise and some great shoestring atmosphere. Wandering into a small town after an auto accident, to begin her new job as a church organist, young Mary Henry (Candace Hilligoss) begins to pick up strange vibes: none of the normal people in town seem to be able to see her, and she keeps being accosted by freakish pasty-faced types who seem to be dead on their feet. The nightmarish finale benefits from its one-of-a-kind "found" setting, an empty amusement park rising like a ghostly castle from the prairie landscape. This is much less aggressive and violent film than George Romero's original Night of the Living Dead, but for sheer skin- crawling spookiness, it's in the same class. --David Chute --This text refers to an out of print or unavailable edition of this title.