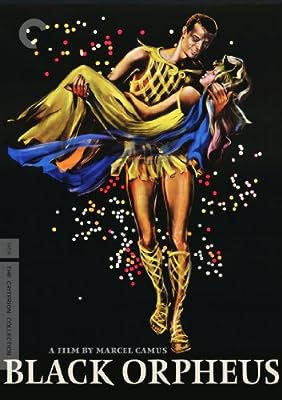 Price: $22.99
As of 2023-02-06 05:09:21 UTC (more info)
Product prices and availability are accurate as of 2023-02-06 05:09:21 UTC and are subject to change. Any price and availability information displayed on http://www.amazon.com/ at the time of purchase will apply to the purchase of this product.
Availability: Not Available - stock arriving soon
Buy Now from Amazon
Product Information (more info)
CERTAIN CONTENT THAT APPEARS ON THIS SITE COMES FROM AMAZON SERVICES LLC. THIS CONTENT IS PROVIDED 'AS IS' AND IS SUBJECT TO CHANGE OR REMOVAL AT ANY TIME.

Winner of both the Academy Award for best foreign-language film and the Cannes Film Festival’s Palme d’Or, Marcel Camus’ Black Orpehus (Orfeu negro) brings the ancient Greek myth of Orpheus and Eurydice to the twentieth-century madness of Carnival in Rio de Janeiro. With its eye-popping photography and ravishing, epochal soundtrack, Black Orpehus was a cultural event, kicking off the bossa nova craze that set hi-fis across America spinning.

Blame it on the bossa nova. French director Marcel Camus created an international sensation, and a craze for all things Brazilian, when he released Black Orpheus in 1959. Black Orpheus, based on a play by Vinicius de Moraes, is a valentine to Rio, Carnaval, and the infectious sounds of salsa and the then-just-emerging sultry bossa nova. When it was released, despite having won the Palme d'Or at Cannes, Black Orpheus had not been widely known, but after it won the Oscar for Best Foreign Language Film, audiences worldwide sparked to its joyous cinematography and unforgettable soundtrack. Much as Leonard Bernstein did two years later with Romeo and Juliet and West Side Story, Camus takes a centuries-old tale of love and doom, the Greek legend of Orpheus, and sets it in modern times, against an unforgettable musical backdrop. The actors are all splendid, including Breno Mello making his screen debut as Orfeo, a streetcar conductor musician with an untamed heart. The American-born Marpessa Dawn, who had been acting in France, plays the lovely, innocent Eurydice, who captures Orfeo's heart. Yet the entire cast is unforgettable, including Lourdes de Oliveira as the gorgeous, hot-tempered Mira, Orfeo's intended, and the lit-from-within Léa Garcia as Serafina. Even the young boys who follow Orfeo's every move are winning and natural young actors. But it's Rio itself that takes center stage in Black Orpheus--a place, through Camus's eyes, where even walking through the marketplace or disembarking a ferry is a dance--joyful, intricate, free, full of possibility. As the characters' stories build into the free-for-all climax of Carnaval itself, they encompass life and death, tragedy and comedy, and beautiful, sensual music that will haunt the viewer long after the final scenes.

The new Criterion Collection set features a wealth of extras, including a new digital print that showcases the vibrant colors and textures of Rio and its hillside favelas. Most memorable and impressive are the documentaries on the making of Black Orpheus--especially the mixed feelings, remembered quite bluntly, of playwright de Moraes when he saw the liberties that Camus had taken with his work. There are wonderful short features from the early '60s, while the initial impact of Black Orpheus was still being felt, including a casual interview with Dawn, serene and composed, about the sensation she and her cast members had created. Not to be missed is the feature on the creation of the soundtrack, by jazz historian Ruy Castro, focusing on how Camus chose the music that would define the world's view of Brazil for a generation, with amazing interviews with influential musicians and artists, including Gilberto Gil and Seu Jorge. "The soundtrack was at least as popular as the film," says Gil, and while that may be true, it would be hard to imagine one without the other. --A.T. Hurley

Being John Malkovich (The Criterion Coll...