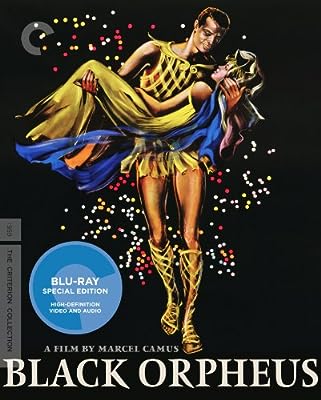 Price: $23.91
As of 2023-02-05 20:35:45 UTC (more info)
Product prices and availability are accurate as of 2023-02-05 20:35:45 UTC and are subject to change. Any price and availability information displayed on http://www.amazon.com/ at the time of purchase will apply to the purchase of this product.
Availability: Not Available - stock arriving soon
Buy Now from Amazon
Product Information (more info)
CERTAIN CONTENT THAT APPEARS ON THIS SITE COMES FROM AMAZON SERVICES LLC. THIS CONTENT IS PROVIDED 'AS IS' AND IS SUBJECT TO CHANGE OR REMOVAL AT ANY TIME.

For decades Black Orpheus has been one of the most popular films ever imported to the U.S., as audiences were immediately dazzled, overjoyed and memorized by the films colorful cast of characters, its delightful romance and tragedy and for its beautiful and extravagant musical numbers of shimmies, bops, and wails which rhythmically go along with its energized aerobic dancing. Even though bossa nova had been the cornerstone of Latin American music for many years, Black Orpheus introduced that form of music to parts of the world that had never heard it before, and completely changed the world of music overnight.

Winner of both the Academy Award for best foreign-language film and the Cannes Film Festival’s Palme d’Or, Marcel Camus’ Black Orpheus (Orfeu negro) brings the ancient Greek myth of Orpheus and Eurydice to the twentieth-century madness of Carnival in Rio de Janeiro. With its eye-popping photography and ravishing, epochal soundtrack, Black Orpheus was a cultural event, kicking off the bossa nova craze that set hi-fis across America spinning.

Camus uses a local, all-black cast of nonprofessional actors and heaps in vast swatches of Carnival footage, which is greatly similar to other musicals like The Gold Diggers of 1935 and Jacques Demy's The Umbrellas of Cherbourg in 1964. Black Orpheus is a stylized daydream, a vision of an entire city that won't stop dancing and celebrating, but still, the full thrust of 'native cinema,' moderated though it was, may never have been so vividly experienced by mainstream Americans and Europeans.

Berlin, Symphony of a Great City