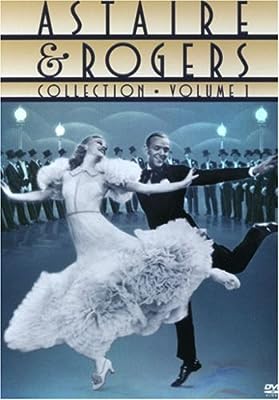 Price: $169.95
As of 2022-11-27 21:19:46 UTC (more info)
Product prices and availability are accurate as of 2022-11-27 21:19:46 UTC and are subject to change. Any price and availability information displayed on http://www.amazon.com/ at the time of purchase will apply to the purchase of this product.
Availability: Not Available - stock arriving soon
Buy Now from Amazon
Product Information (more info)
CERTAIN CONTENT THAT APPEARS ON THIS SITE COMES FROM AMAZON SERVICES LLC. THIS CONTENT IS PROVIDED 'AS IS' AND IS SUBJECT TO CHANGE OR REMOVAL AT ANY TIME.

You'll Love The Way Fred and Ginger Look Tonight in the 5-film, 5-Disc Astaire and Rogers Collection Volume One, including the highly acclaimed Top Hat and Swing Time.

Fans of classic movie musicals will be in heaven with Astaire & Rogers Collection, Vol. 1, featuring the DVD debut of five films of Fred Astaire and Ginger Rogers, the quintessential dancing duo. The two gems of the set are Top Hat (1935), generally considered their definitive movie, and Swing Time (1936), which many consider their most enjoyable. Follow the Fleet (1936), Shall We Dance (1937), and The Barkleys of Broadway (1949) fill out the set, each with its own charms. The Astaire-Rogers films mix light romantic comedy (usually centered around mistaken identities and ending, inevitably, in blissful wedding promises) with elegant dinner wear and surreal sets intended to transport '30s audiences away from the Depression to such locales as Rio, Paris, and Venice. The two stars are also aided by a recurring stable of RKO players such as Edward Everett Horton (master of the double-take), Eric Blore, and Helen Broderick. And then there's that sensational dancing set to great songs by the likes of Irving Berlin, George and Ira Gershwin, and Jerome Kern, numbers that are not merely entertaining but also innovative for their time in that they reveal character and advance the plot. Add it all up, and you have a recipe for an irrepressible joie de vivre that practically defines the movie musical.

With a score by Irving Berlin, Top Hat is most famous for two numbers, Astaire's definitive tuxedo setting "Top Hat, White Tie, and Tails" and the feathery duet "Cheek to Cheek." But other joys include Astaire's "Fancy Free" declaration, "Isn't It a Lovely Day," and the grand finale "The Piccolino." Favorite musical moments in Swing Time include the set-piece "Pick Yourself Up," in which Rogers "teaches" Astaire to dance before they break into a spectacular number; the farewell ode "Never Gonna Dance," and the Oscar-winning "Just the Way You Look Tonight," from the team of Jerome Kern and Dorothy Fields.

Follow the Fleet changes the pace a bit, with Astaire playing a sailor, and it suffers from making him and Rogers the second-banana couple to the dull Randolph Scott and Harriet Hilliard. But it still has plenty of laughs and some classic Irving Berlin numbers, including "Let Yourself Go," which Rogers sings before she and Astaire compete in a dance contest; a Rogers solo tap number; "I'm Putting All My Eggs in One Basket," their best comic dance. The pièce de résistance is "Let's Face the Music and Dance," a show within a show in which the pair dons their customary evening formals. Effortlessly flowing from pantomime to song to dance, this sublime piece of storytelling is one of the series' defining moments. Shall We Dance has a complex plot that has Astaire and Rogers actually getting married before the final credits roll, and turns George and Ira Gershwin's brilliant "They Can't Take That Away from Me" into a heartbreaking ode. Other great songs include "Slap That Bass," "They All Laughed," and "Let's Call the Whole Thing Off," unforgettably performed on roller skates. The Barkleys of Broadway is the oddity, reuniting the stars 10 years after their last RKO picture when Judy Garland had to be replaced due to health problems. It's trademark MGM: splashy colors, Fred in a gimmicky solo number (playing sorcerer's apprentice to a line of unoccupied shoes), Oscar Levant providing his usual dynamic pianism and acerbic personality, and a score that is at its best when it borrows songs from a previous generation (including the big ballroom number set to "They Can't Take That Away from Me"). The film falls short of their best work, but serves as a fond remembrance of the most glorious partnership in film history. --David Horiuchi

All About My Mother