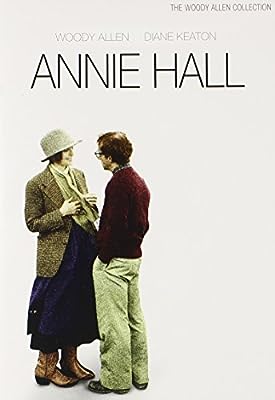 Price: $8.97
Availability: Not Available - stock arriving soon
Buy Now from Amazon
Product Information (more info)
CERTAIN CONTENT THAT APPEARS ON THIS SITE COMES FROM AMAZON SERVICES LLC. THIS CONTENT IS PROVIDED 'AS IS' AND IS SUBJECT TO CHANGE OR REMOVAL AT ANY TIME.

Allen's Alvy Singer is trying to find love in the Big Apple, despite his neurosis, and falls in love with Keaton's aspiring singer. This comedy also launched a women's fashion trend based on Annie Hall's look.

Annie Hall is one of the truest, most bittersweet romances on film. In it, Allen plays a thinly disguised version of himself: Alvy Singer, a successful--if neurotic--television comedian living in Manhattan. Annie (the wholesomely luminous Dianne Keaton) is a Midwestern transplant who dabbles in photography and sings in small clubs. When the two meet, the sparks are immediate--if repressed. Alone in her apartment for the first time, Alvy and Annie navigate a minefield of self-conscious "is-this-person-someone-I'd-want-to-get-involved-with?" conversation. As they speak, subtitles flash their unspoken thoughts: the likes of "I'm not smart enough for him" and "I sound like a jerk." Despite all their caution, they connect, and we're swept up in the flush of their new romance. Allen's antic sensibility shines here in a series of flashbacks to Alvy's childhood, growing up, quite literally, under a rumbling roller coaster. His boisterous Jewish family's dinner table shares a split screen with the WASP-y Hall's tight-lipped holiday table, one Alvy has joined for the first time. His position as outsider is uncontestable he looks down the table and sizes up Annie's "Grammy Hall" as "a classic Jew-hater."

The relationship arcs, as does Annie's growing desire for independence. It quickly becomes clear that the two are on separate tracks, as what was once endearing becomes annoying. Annie Hall embraces Allen's central themes--his love affair with New York (and hatred of Los Angeles), how impossible relationships are, and his fear of death. But their balance is just right, the chemistry between Allen's worry-wart Alvy and Keaton's gangly, loopy Annie is one of the screen's best pairings. It couldn't be more engaging. --Susan Benson

And Then There Were None [Blu-ray]

A Night at the Opera

An Affair To Remember (50th Anniversary ...