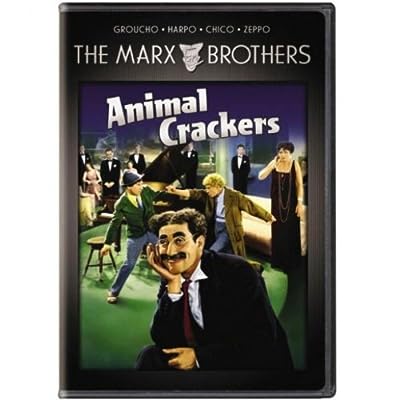 Price: $9.99
As of 2023-02-08 04:41:20 UTC (more info)
Product prices and availability are accurate as of 2023-02-08 04:41:20 UTC and are subject to change. Any price and availability information displayed on http://www.amazon.com/ at the time of purchase will apply to the purchase of this product.
Availability: Not Available - stock arriving soon
Buy Now from Amazon
Product Information (more info)
CERTAIN CONTENT THAT APPEARS ON THIS SITE COMES FROM AMAZON SERVICES LLC. THIS CONTENT IS PROVIDED 'AS IS' AND IS SUBJECT TO CHANGE OR REMOVAL AT ANY TIME.

Filled with comedy sketches, musical numbers and plenty of gags, Animal Crackers is often regarded as the Marx Brothers' most quoted film for its witty and unforgettable dialogue. Groucho stars as Captain Spaulding, a famed African explorer who is being honored at a high society party at the estate of Mrs. Rittenhouse (Margaret Dumont). Mayhem and chaos ensue after a valuable painting disappears and Spaulding, along with the Professor (Harpo), Signore Emanuel Ravelli (Chico) and Horatio (Zeppo) "help" search for it. Highlighted by musical performances including "Hooray for Captain Spaulding" (which would later become the theme song to Groucho's popular TV series You Bet Your Life), this classic comedy earned a place on the AFI’s 100 Years…100 Movie Quotes list.

A Letter to Three Wives