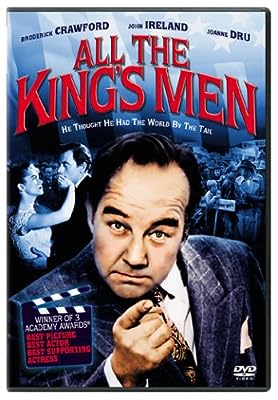 Price: $9.99
As of 2023-02-06 15:51:02 UTC (more info)
Product prices and availability are accurate as of 2023-02-06 15:51:02 UTC and are subject to change. Any price and availability information displayed on http://www.amazon.com/ at the time of purchase will apply to the purchase of this product.
Availability: Not Available - stock arriving soon
Buy Now from Amazon
Product Information (more info)
CERTAIN CONTENT THAT APPEARS ON THIS SITE COMES FROM AMAZON SERVICES LLC. THIS CONTENT IS PROVIDED 'AS IS' AND IS SUBJECT TO CHANGE OR REMOVAL AT ANY TIME.

In a bravura performance, Broderick Crawford won the 1949 Academy Award(r) for Best Actor with his stunning portrayal of bull-headed, backwoods lawyer Willie Stark, in this powerful drama about political and personal corruption. A somber but realistic chronicle of raw, brutal power in force, ALL THE KING'S MEN is based on Robert Penn Warren's Pulitzer Prize-winning novel of the same name. It was brought to the screen in 1949 by producer Robert Rossen who also wrote the screenplay and directed thefilm. The story was inspired by the rise and fall of southern bigwig Huey Pierce Long, the infamous"Kingfish" who was Louisiana's governor and one-time senator. Long's cunning tactics of building public works during the depression to serve his own needs more than those of his constituents eventually brought about his own assassination in 1935. A compelling story of a self-made, self-styled politician, it was politics that almost prevented Rossen from making ALL THE KING'S MEN in the first place

All That Heaven Allows (The Criterion Co...