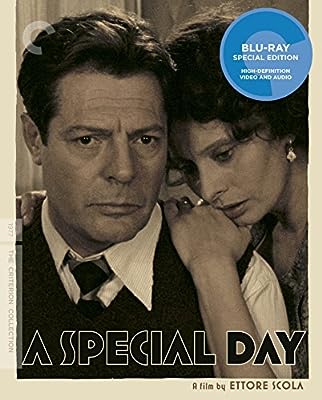 Price: $26.19
As of 2023-02-07 19:18:17 UTC (more info)
Product prices and availability are accurate as of 2023-02-07 19:18:17 UTC and are subject to change. Any price and availability information displayed on http://www.amazon.com/ at the time of purchase will apply to the purchase of this product.
Availability: Not Available - stock arriving soon
Buy Now from Amazon
Product Information (more info)
CERTAIN CONTENT THAT APPEARS ON THIS SITE COMES FROM AMAZON SERVICES LLC. THIS CONTENT IS PROVIDED 'AS IS' AND IS SUBJECT TO CHANGE OR REMOVAL AT ANY TIME.

Italian cinema dream team Sophia Loren (Marriage Italian Style) and Marcello Mastroianni (La dolce vita) are cast against glamorous type and deliver two of the finest performances of their careers in this moving, quietly subversive drama from Ettore Scola (The Family). Though it’s set in Rome on the historic day in 1938 when Benito Mussolini and the city first rolled out the red carpet for Adolf Hitler, the film takes place entirely in a working-class apartment building, where an unexpected friendship blossoms between a pair of people who haven’t joined the festivities: a conservative housewife and mother tending to her domestic duties and a liberal radio broadcaster awaiting deportation. Scola paints an exquisite portrait in sepia tones, a story of two individuals helpless in the face of fascism’s rise. BLU-RAY SPECIAL EDITION FEATURES • New, restored 4K digital transfer, supervised by director Ettore Scola, with uncompressed monaural soundtrack • New interviews with Scola and actor Sophia Loren • Two 1977 episodes of The Dick Cavett Show featuring Loren and actor Marcello Mastroianni • Trailer • New English subtitle translation • PLUS: An essay by critic Deborah Young