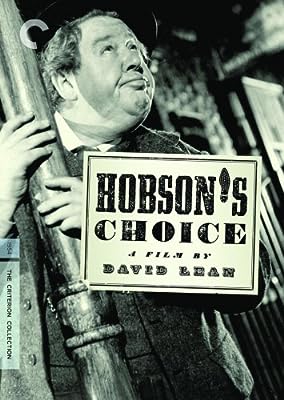 Price: $24.02
As of 2021-08-01 07:09:27 UTC (more info)
Product prices and availability are accurate as of 2021-08-01 07:09:27 UTC and are subject to change. Any price and availability information displayed on http://www.amazon.com/ at the time of purchase will apply to the purchase of this product.
Availability: Not Available - stock arriving soon
Buy Now from Amazon
Product Information (more info)
CERTAIN CONTENT THAT APPEARS ON THIS SITE COMES FROM AMAZON SERVICES LLC. THIS CONTENT IS PROVIDED 'AS IS' AND IS SUBJECT TO CHANGE OR REMOVAL AT ANY TIME.

An unsung comic triumph from David Lean, Hobson's Choice stars the legendary Charles Laughton as the harrumphing Henry Hobson, the owner of a boot shop in late-Victorian Northern England. With his haughty, independent daughter Maggie (Brenda De Banzie) decides to forge her own path, romantically and professionally, with the help of none other than Henry's prized bootsmith Will (a splendid John Mills), father and daughter find themselves head-to-head in a fiery match of wills. Equally charming and caustic, Hobson's Choice, adapted from Harold Brighouse's famous play, is filled to the brim with great performances and elegant, inventive camera work.

Britain's greatest-ever film director David Lean wasn't feted for providing belly-laughs. His finest films, from Great Expectations (1946) to Lawrence of Arabia (1962) are resolutely sober, which is more than can be said of Henry Horatio Hobson in his wonderfully comic encounter with the moon in Hobson's Choice. Lean's only other comedy was Blithe Spirit (1945), but here he approaches matters of the heart with a surprising lightness of touch and wins a marvellous performance from Charles Laughton--himself soon to make his one and only film as a director, Night of the Hunter (1955). The setting is late-19th century Salford (the b/w location filming is exceptional), and widower Henry Hobson forbids his three daughters to marry to avoid paying their dowries. Romance will not be thwarted by economics, and much humorous conflict ensues, interspersed with some serious and even disturbing moments--the shaving scene when Laughton gets the DTs is a queasily unbalanced. Brenda De Banzie is splendidly spirited as the eldest daughter, Maggie, while her fiance is played by the ever excellent John Mills, who would later win an Oscar for his part in Lean's much more serious love story, Ryan's Daughter (1970). --Gary S. Dalkin