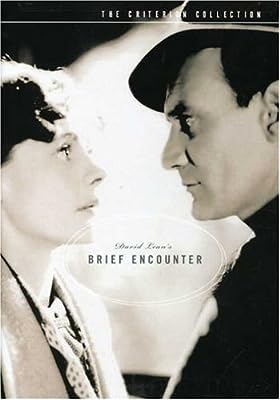 Price: $99.94
As of 2022-10-04 14:07:41 UTC (more info)
Product prices and availability are accurate as of 2022-10-04 14:07:41 UTC and are subject to change. Any price and availability information displayed on http://www.amazon.com/ at the time of purchase will apply to the purchase of this product.
Availability: Not Available - stock arriving soon
Buy Now from Amazon
Product Information (more info)
CERTAIN CONTENT THAT APPEARS ON THIS SITE COMES FROM AMAZON SERVICES LLC. THIS CONTENT IS PROVIDED 'AS IS' AND IS SUBJECT TO CHANGE OR REMOVAL AT ANY TIME.

To many, Brief Encounter may seem like a relic of more proper times--or, specifically, more properly British times--when the pressures of marital decorum and fidelity were perhaps more keenly felt. In truth, David Lean's fourth film remains a timeless study of true love (or, rather, the promise of it), and the aching desire for intimate connection that is often subdued by the obligations of marriage. And so it is that ordinary Londoners Alec (Trevor Howard), a married doctor, and contented housewife Laura (Celia Johnson) meet by chance one day in a train station, when he volunteers to remove a fleck of ash from her eye (a romantic gesture that, perhaps, inspired Robert Towne's "flaw in the iris" scene in Chinatown).

It so happens that their schedules coincide at the train station every Thursday, and their casual attraction grows, through quiet conversation and longing expressions, into the desperate recognition of mutual love. From this point forward, Lean turns this utterly precise, 85-minute film into a bracing study of romantic suspense, leading inevitably, and with the paranoid, furtive glances of a spy thriller, to the moment when this brief encounter must be consummated or abandoned altogether. Decades later, the outcome of this affair--both agonizing and rapturous--is subtle and yet powerful enough to draw tears from the numbest of souls, and spark debate regarding the tragedy or virtue of the choices made. A truly universal film, with meticulously controlled emotions revealed through the flawless performances of Howard and Johnson, and an enduring masterpiece that continued Lean on his course to cinematic greatness. --Jeff Shannon

A Passage to India [Blu-ray]