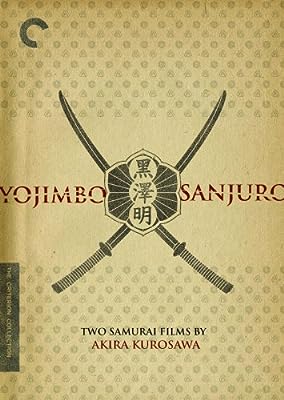 Price: $49.99
Availability: Not Available - stock arriving soon
Buy Now from Amazon
Product Information (more info)
CERTAIN CONTENT THAT APPEARS ON THIS SITE COMES FROM AMAZON SERVICES LLC. THIS CONTENT IS PROVIDED 'AS IS' AND IS SUBJECT TO CHANGE OR REMOVAL AT ANY TIME.

After Akira Kurosawa's Yojimbo was released in 1961, the samurai film would never be the same. It's difficult for latter-day Western audiences to fully appreciate just how revolutionary Kurosawa's film was in its time; it had the same kind of popular impact that Quentin Tarantino's Pulp Fiction had 33 years later, which is to say, it completely revolutionized its genre, and its influence continues to this day. With an emphasis on dark, delicious comedy, Kurosawa deliberately set out to overturn the conventions of chambara--or swordplay film--and he began by casting the great Toshiro Mifune in the role that would define his career. Unlike the samurai of previous films (including Kurosawa's own masterpiece, Seven Samurai), Sanjuro was an unkempt, down-and-out drifter, a masterless ronin and with time on his hands and nowhere to go. When he chances upon a corrupt, terror-stricken village where clashing merchants are engaged in a ruthless range war, Sanjuro amuses himself by playing both ends against the middle, offering his services as yojimbo (bodyguard) to both sides, then standing back to watch all hell break loose. It's a perfect game of wily deception, hugely popular with Japanese moviegoers as Mifune's performance gained iconic status. Yojimbo's international success was no less impressive; it eventually inspired two noteworthy remakes (Sergio Leone's spaghetti Western A Fistful of Dollars in 1964, and Walter Hill's mobster interpretation, Last Man Standing, in 1996), and remains one of Kurosawa's most popular classics.

A sequel was inevitable, and Kurosawa responded to public demand as only a true artist would, with the equally impressive Sanjuro, quite different from Yojimbo while allowing Mifune to reprise his signature role with a lighter comedic touch. This time, Sanjuro is recruited by a group of young, idealistic samurai to eliminate corruption in their clan, and in the process he completely subverts their overly reverent notions of "proper" samurai behavior. And while both Yojimbo and Sanjuro were milestones in movie violence (featuring the spurting geysers of arterial blood that would become a staple of chambara from this point forward), the calmer, more comically subdued Sanjuro actually boasts a higher body count, and both films rank among the finest examples of Kurosawa's peerless mastery of action.

The Criterion Collection's double-disc set is a must-have for any serious cinephile. Both films (also available separately) are presented with all-new, fully restored high-definition digital transfers, representing (as in the case of Seven Samurai) a significant improvement over Criterion's previous DVD releases. Both films feature full-length commentaries by Kurosawa scholar Stephen Prince (with eloquent emphasis on camera movement and composition) in addition to retrospective documentaries culled from the priceless Japanese Toho Masterworks series Akira Kurosawa: It Is Wonderful to Create, featuring illuminating interviews with many of Kurosawa's closest collaborators. Theatrical trailers and behind-the-scenes photo galleries are also included, along with new-and-improved subtitles, insightful booklet essays by critics Michael Sragow and Alexander Sesonske, and rarely seen production notes by Kurosawa and members of his casts & crew. With this two-disc reissue, Criterion's previous releases of Yojimbo and Sanjuro should now be considered officially obsolete. --Jeff Shannon