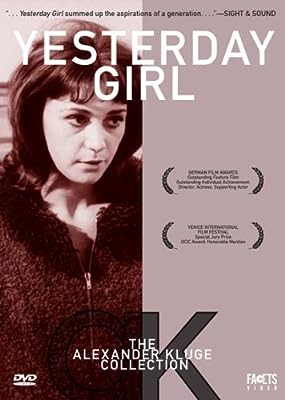 Price: $19.95
As of 2023-02-04 11:25:21 UTC (more info)
Product prices and availability are accurate as of 2023-02-04 11:25:21 UTC and are subject to change. Any price and availability information displayed on http://www.amazon.com/ at the time of purchase will apply to the purchase of this product.
Availability: Not Available - stock arriving soon
Buy Now from Amazon
Product Information (more info)
CERTAIN CONTENT THAT APPEARS ON THIS SITE COMES FROM AMAZON SERVICES LLC. THIS CONTENT IS PROVIDED 'AS IS' AND IS SUBJECT TO CHANGE OR REMOVAL AT ANY TIME.

As the flagship film of the "young German cinema" movement, Alexander Kluge's first feature, Yesterday Girl, paved the way for the New German Cinema of the 1970s. Produced immediately after the Oberhausen Manifesto, Yesterday Girl is an experimental, youth-oriented satire with a fragmentary story about an unruly heroine named Anita G. (Alexandra Kluge, the director's sister and frequent collaborator.) Like any postwar German youth worth her salt, Anita wants to break free of the collective baggage left by her parent's generation, but her flee from East to West Germany only confirms that conservatism and scarred memories thrive on both sides of the wall. A nominee for the Golden Lion and winner of a Special Jury Prize at the 1966 Venice Film Festival, Yesterday Girl made it clear the waning German film industry was headed for a renaissance. In German with English subtitles.