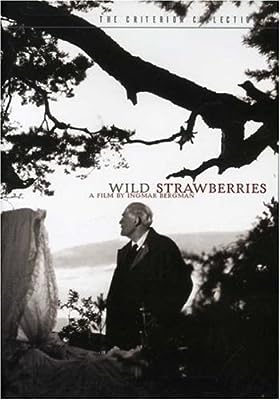 Price: $26.29
As of 2023-02-06 04:06:16 UTC (more info)
Product prices and availability are accurate as of 2023-02-06 04:06:16 UTC and are subject to change. Any price and availability information displayed on http://www.amazon.com/ at the time of purchase will apply to the purchase of this product.
Availability: Not Available - stock arriving soon
Buy Now from Amazon
Product Information (more info)
CERTAIN CONTENT THAT APPEARS ON THIS SITE COMES FROM AMAZON SERVICES LLC. THIS CONTENT IS PROVIDED 'AS IS' AND IS SUBJECT TO CHANGE OR REMOVAL AT ANY TIME.

The film that catapulted Bergman to the forefront of world cinema is the director's richest, most humane movie. Traveling to receive an honorary degree, Professor Isak Borg (masterfully played by the veteran Swedish director Victor Sjöström), is forced to face his past, come to terms with his faults, and accept the inevitability of his approaching death. Through flashbacks and fantasies, dreams and nightmares, Wild Strawberries captures a startling voyage of self-discovery and renewed belief in mankind.