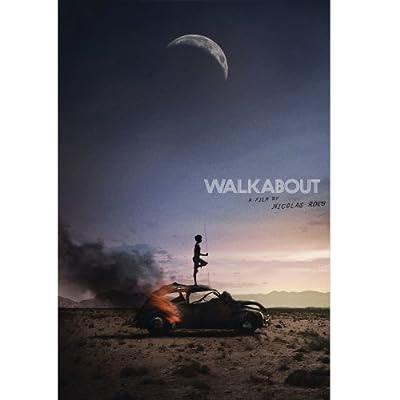 Price: $27.99
As of 2022-08-17 22:57:30 UTC (more info)
Product prices and availability are accurate as of 2022-08-17 22:57:30 UTC and are subject to change. Any price and availability information displayed on http://www.amazon.com/ at the time of purchase will apply to the purchase of this product.
Availability: Not Available - stock arriving soon
Buy Now from Amazon
Product Information (more info)
CERTAIN CONTENT THAT APPEARS ON THIS SITE COMES FROM AMAZON SERVICES LLC. THIS CONTENT IS PROVIDED 'AS IS' AND IS SUBJECT TO CHANGE OR REMOVAL AT ANY TIME.

A lost teen-ager and her little brother meet an Aborigine teen in the Outback. Directed by Nicolas Roeg.

Very few films achieve a kind of subliminal greatness with cross-cultural impact, but Walkabout is one of those films--a visual tone poem that functions more as an allegory than a conventionally plotted adventure. Considered a cult favorite for years, Nicolas Roeg's 1971 film--about two British children who are rescued in the Australian outback by a young aborigine--was originally released in the U.S. with an R rating, edited from its European length of 100 minutes. In 1997, the film was fully restored to its director's cut, and in its remastered video and DVD release, it's now wisely unrated (as Roeg had always intended) but still suitable for viewers of all ages. For parents this is a rare opportunity to treat well-supervised children (ages 5 and over) to an adventure that won't insult their intelligence, presenting scenes of frontal nudity and the hunting of animals in a context that invites valuable discussion and introspection. Through exquisite cinematography and a story of subtle human complexity, the film continues to resonate on many thematic and artistic levels. Roeg had always intended it to be a cautionary morality tale, in which the limitations and restrictions of civilization become painfully clear when the two children (played by Jenny Agutter and Roeg's young son, Lucien John) cannot survive without the aborigine's assistance. They become primitives themselves, if only temporarily, while the young aborigine proves ultimately and tragically unable to join the "family" of civilization. With its story of two worlds colliding, Walkabout now seems like a film for the ages, hypnotic and open to several compelling levels of interpretation. In addition to presenting the film in its original 1.77:1 aspect ratio, the Criterion Collection DVD of Walkabout includes a variety of bonus features, including a full-length commentary by Nicolas Roeg and Jenny Agutter, original theatrical trailers, and an essay by critic Roger Ebert. --Jeff Shannon

Where Is the Friend's Home?