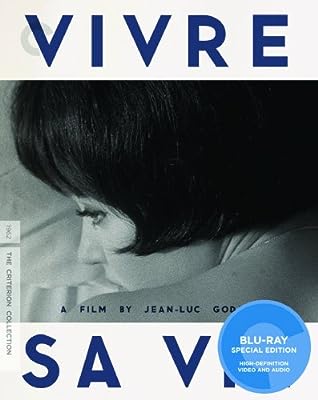 Vivre Sa Vie (or in English titled My Life to Live), is the tragic story on a woman's slow descent into prostitution and death. Directed by the legendary Jean-Luc Godard, he divides the film into 12 tableaux, very similar to a novel. The actress who plays the character of Nana is the beautiful and legendary Anna Karina who was Godard's current wife at the time. Vivre Sa Vie is one of Godard's most heartbreaking films about the social situation of women and their struggles in an unsympathetic world, as it became one of the most influential films of The French New Wave movement. When originally released Vivre Sa Vie wasn't as highly praised as Godard's earlier New Wave hit Breathless, but throughout the years it is now considered not only one of Godard's very best films, but his most studied and adored by fans and critics.

Jean-Luc Godard and the French New Wave were at the height of their power and creativity when Godard released Vivre Sa Vie (Living Her Life) in 1962. And watching it again, years later, instantly transports one to the era where an offhand remark, a lazy circle of cigarette smoke, a sidelong glance, a disaffected "I don't care about you" could all communicate deep, conflicted longing, alienation, postwar malaise, and infinite possibility. In fact, watching Vivre Sa Vie, starring Godard's lovely muse, Anna Karina, is at once both enervating--and exhilarating. The film is subtitled Film en Douze Tableaux, and the story shows Karina as Nana in 12 different short films, snapshots of her lonely, seemingly aimless life--in scenes that stay with the viewer for days afterward. In the very first tableau, Nana and a former lover, Paul (André S. Labarthe), are having a sad, disjointed conversation in a café--are they breaking up? Getting back together? The pain and power of the scene lies in its ambiguousness. And Godard and his brilliant cinematographer, Raoul Coutard, shoot this initial scene, of the most intimate conversation between two lovers, entirely from behind them. The sad, longing remarks, barbs, halfhearted entreaties--they are all communicated while the viewer looks just at the back of Karina's sleek black bob and Labarthe's scruffy hair. Only near the end of that scene, as the viewer is practically craning forward to connect to the characters, do we get a glimpse of half of a cheek, one eyebrow. And from this moment, Godard and the cast have the viewer enthralled. In a later tableau, we watch long, uninterrupted scenes of The Passion of Joan of Arc--in itself a treat--and the supposedly disaffected heroine Nana weeping rivers of tears, silently, in the theater. There are many layers to this lovely young woman, and each of the 12 snapshots of her life reveals more. Nana's life becomes a tragedy, as she descends into prostitution--yet along the way, her luminescence is revealed in small ways. In one scene, she recalls a writing exercise from when she was a child. "Birds are creatures with an outside, and an inside," she recites. "When you remove the outside, you see the inside. When you remove the inside, you see the soul." The shattering beauty of Vivre Sa Vie is that Godard and Karina allow us to see the outside, then the inside, and then finally, the soul. The Criterion Collection edition offers true cinema riches, especially in an interview with Karina from 1962, several modern commentaries putting Godard and the film in its historical context, reportage from early-'60s France on the dire situation of prostitutes at the time, a booklet of film criticism, and much more. --A.T. Hurley

Godard's unique literary narration, creative camera shots and long philosophical dialog sequences between several of his characters closely resembles the style and techniques of director Quentin Tarantino, most famously with his film Pulp Fiction. For instance, Vivre sa Vie is set up as a literary narration separated by different chapters, which is a similar storytelling approach that Tarantino uses for his films. Nana's sporting her infamous ebony bob in the film is later worn by Uma Thurman's character Mia in Pulp Fiction and there's the classic jukebox dance sequence, which is reminiscent of Mia and Vincent's dance competition at Jack Rabbit Slims. In one of the greatest sequences in the film the character of Nana spends the last money she has on the viewing of Carl Dreyer's silent masterpiece The Passion of Joan of Arc. The audience witnesses Nana weep as she identifies with Joan, the teary eyed martyr on the movie screen, as Godard brilliantly captures and iconized the tragic art of the cinema, in a heartbreaking sequence without the use of words.

Vengeance Is Mine (The Criterion Collect...

Videodrome (The Criterion Collection) [B...