Vengeance Is Mine (The Criterion Collection) 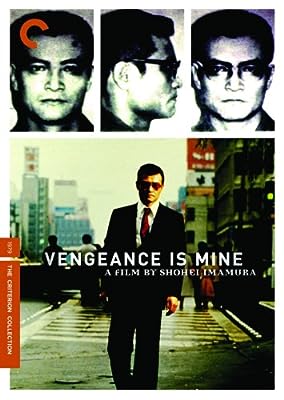 Price: $29.95
As of 2021-10-23 11:24:56 UTC (more info)
Product prices and availability are accurate as of 2021-10-23 11:24:56 UTC and are subject to change. Any price and availability information displayed on http://www.amazon.com/ at the time of purchase will apply to the purchase of this product.
Availability: Not Available - stock arriving soon
Buy Now from Amazon
Product Information (more info)
CERTAIN CONTENT THAT APPEARS ON THIS SITE COMES FROM AMAZON SERVICES LLC. THIS CONTENT IS PROVIDED 'AS IS' AND IS SUBJECT TO CHANGE OR REMOVAL AT ANY TIME.

Flashbacks show a Japanese criminal's sordid past, explaining his rage and anti-social behavior.

Long before Vengeance Is Mine, American directors like Jules Dassin (Naked City) invested the procedural with journalistic detail. Similarly, Japan's Shohei Imamura (The Eel) lays out all the facts for the viewer's delectation: names, dates, times of death, and methods of execution, i.e. "skull crushed with blunt object." (In the DVD booklet, Michael Atkinson compares him to journalist-turned-filmmaker Samuel Fuller.) The murderer, however, is no mystery. Imamura introduces us to the unrepentant Iwao Enokizu (Mishima's Ken Ogata) in the opening sequence. He then backtracks to the clutch of murders the con man committed in the early 1960s. At the same time, he keeps an eye on the cops as they follow his trail, while flashing back to Enokizu's rebellious youth. Based on Ryuzo Saki's true-crime novel, Vengeance Is Mine further deviates from the neo-realist noirs of old by withholding judgment. That isn't completely surprising, since it was preceded by nine years in which Imamura worked exclusively in the documentary realm. Vicious killer that he is, Enokizu is outgoing rather than downbeat. Further, his past includes a weak-willed father and an unfaithful wife, but that information doesn't make him sympathetic. Nor does it explain his crimes. Enokizu is an empty vessel for the audience to fill as it sees fit. As Imamura acknowledges in "My Approach to Filmmaking" (also part of the booklet), "I love all the characters in my films, even the loutish and frivolous ones." Vengeance Is Mine is a must for fans of Japanese cinema and unconventional thrillers alike. --Kathleen C. Fennessy