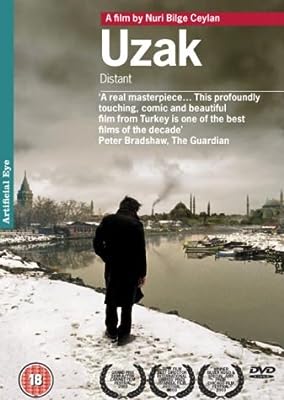 Price: $36.99
As of 2022-08-10 23:50:27 UTC (more info)
Product prices and availability are accurate as of 2022-08-10 23:50:27 UTC and are subject to change. Any price and availability information displayed on http://www.amazon.com/ at the time of purchase will apply to the purchase of this product.
Availability: Not Available - stock arriving soon
Buy Now from Amazon
Product Information (more info)
CERTAIN CONTENT THAT APPEARS ON THIS SITE COMES FROM AMAZON SERVICES LLC. THIS CONTENT IS PROVIDED 'AS IS' AND IS SUBJECT TO CHANGE OR REMOVAL AT ANY TIME.

United Kingdom released, PAL/Region 2 DVD: it WILL NOT play on standard US DVD player. You need multi-region PAL/NTSC DVD player to view it in USA/Canada: LANGUAGES: Turkish ( Dolby Digital 2.0 ), English ( Subtitles ), WIDESCREEN, SPECIAL FEATURES: Behind the scenes, Cast/Crew Interview(s), Filmographies, Interactive Menu, Scene Access, Short Film, Trailer(s), SYNOPSIS: Yusef (Mehmet Emin Toprak) leaves his small town and travels across barren snowy lands and roads to the port city of Istanbul to seek employment and stay with his cousin Mahmut (Muzaffer Ozdemir). Yusef spends many snowy days seeking work on a shipping line to discover that a hiring freeze is activated, but is bolstered by a sense of hope in the city which is a contrast to what he has known. Mahmut is a successful commercial photographer and his ordered life is disrupted by the presence of his cousin and this exacerbates his concern with his ex-wife Nazan (Zuhal Gencer Erkaya) who has remarried and is leaving to live in Canada with her new husband. When Mahmut leaves town on a photo shoot he hires Yusef to accompany him as an assistant which puts some money into Yusefs hands. Mahmut receives word that his mother is sick and he leaves again to tend to her leaving Yusef alone in the house, and returns to find that his cousin has not kept the house clean and neat which cause the two to argue. Yusef walks the streets sometimes following an attractive girl (Ebru Ceylan) he has seen but cannot find the opportunity to speak with her. Mahmut follows his ex-wife, Nazan, to the airport and watches as she and her new husband leave the country. Yusef and Mahmut each live in isolated world and makes decisions that bring about the subtlest of changes in their lives, changes that have great consequences. SCREENED/AWARDED AT: Cannes Film Festival, European Film Awards, ...Distant ( Uzak ) ( Distante )