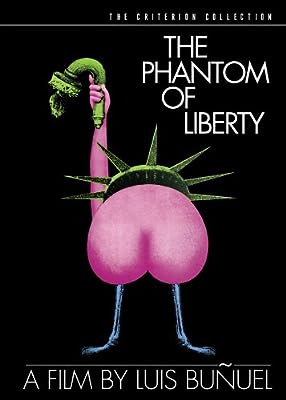 Price: $29.95
As of 2022-07-01 04:04:34 UTC (more info)
Product prices and availability are accurate as of 2022-07-01 04:04:34 UTC and are subject to change. Any price and availability information displayed on http://www.amazon.com/ at the time of purchase will apply to the purchase of this product.
Availability: Not Available - stock arriving soon
Buy Now from Amazon
Product Information (more info)
CERTAIN CONTENT THAT APPEARS ON THIS SITE COMES FROM AMAZON SERVICES LLC. THIS CONTENT IS PROVIDED 'AS IS' AND IS SUBJECT TO CHANGE OR REMOVAL AT ANY TIME.

Bourgeois convention is demolished in Luis Bu±uel's surrealist gem The Phantom of Liberty. Featuring an elegant soir#e with guests seated at toilet bowls, poker-playing monks using religious medals as chips, and police officers looking for a missing girl who is right under their noses, this perverse, playfully absurd comedy of nonsequiturs deftly compiles many of the themes that preoccupied Bu±uel throughout his career-from the hypocrisy of conventional morality to the arbitrariness of social arrangements.

Any serious lover of film eventually (if not immediately) succumbs to the genius of Luis Bunuel. The bottomless wit and unsentimental clear-sightedness of the Spanish master is evident throughout his career, but Bunuel has the added bonus of never tapering off, never losing his edge. The Phantom of Liberty was produced when Bunuel was in his mid-70s, and it's as hilariously impertinent as anything he ever made. Along with his (and anybody's) key collaborator Jean-Claude Carriere, Bunuel strings together a series of reverse-logic dreams and surrealist blackouts, which flow from one to another without building into anything like a conventional storyline.

A nurse at an inn is sidetracked by a foursome of poker-playing priests, while an S&M couple down the hall invite everyone to their room for a drink and a show; a sit-down party has guests seated on toilets around a table; a police commissioner receives a phone call from his dead sister. None of it makes sense, except that it makes absolute sense. By the time a little girl is reported missing by her frantic parents, despite the fact that she is manifestly with them in schoolroom and police station, the film has entered the zone where comedy and unnerving observations come together in a perfect way. Many top European actors participate in this exercise, including Michel Piccoli, Monica Vitti, Jean Rochefort, and Jean-Claude Brialy. Perhaps the format limits the film from gaining the resonance of latter Bunuel films such as The Discreet Charm of the Bourgeoisie or That Obscure Object of Desire, but it's a marvelous surrealist variety show. --Robert Horton