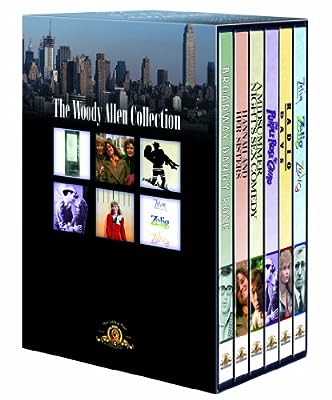 Price: $79.98
As of 2022-08-15 17:53:57 UTC (more info)
Product prices and availability are accurate as of 2022-08-15 17:53:57 UTC and are subject to change. Any price and availability information displayed on http://www.amazon.com/ at the time of purchase will apply to the purchase of this product.
Availability: Not Available - stock arriving soon
Buy Now from Amazon
Product Information (more info)
CERTAIN CONTENT THAT APPEARS ON THIS SITE COMES FROM AMAZON SERVICES LLC. THIS CONTENT IS PROVIDED 'AS IS' AND IS SUBJECT TO CHANGE OR REMOVAL AT ANY TIME.

This Woody Allen boxed set captures the first half of what could be called Allen's "Mia period," his films from the early 1980s. The lighthearted A Midsummer Night's Sex Comedy, about the neurotic romping of a bunch of friends at a country house, marks the beginning of Woody and Mia Farrow's film relationship, followed by Zelig, Allen's clever pseudo-documentary of a man who just wants to fit in. Broadway Danny Rose, the tale of a mediocre talent agent who gets involved with a client's wife, is seen as a trifle by some but held as one of Allen's best films by others. But the next two are a pair of undisputed knockouts: The Purple Rose of Cairo, in which the hero of a movie (Jeff Daniels) steps off the screen to help a woeful waitress (Farrow). The ending is at first heart-wrenching, then finds a wistful hope. Hannah and Her Sisters is possibly, after Annie Hall, Allen's most loved movie, with its Chekhovian mix of love and sorrow in the lives of three sisters (Farrow, Dianne Wiest, and Barbara Hershey). Hannah won a number of awards, including Oscars® for best screenplay and supporting acting for both Wiest and Michael Caine (as Farrow's husband). Finally, the nostalgic Radio Days rounds out the set with a gentle look at entertainment back when people had to dream up their own pictures. These six films represent one of Allen's strongest periods; he moved fluidly from comedy to drama, avoiding big statements but ruefully exploring the foibles of humanity. --Bret Fetzer