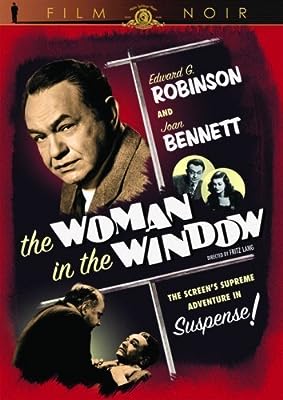 Price: $19.98
As of 2022-10-04 20:22:28 UTC (more info)
Product prices and availability are accurate as of 2022-10-04 20:22:28 UTC and are subject to change. Any price and availability information displayed on http://www.amazon.com/ at the time of purchase will apply to the purchase of this product.
Availability: Not Available - stock arriving soon
Buy Now from Amazon
Product Information (more info)
CERTAIN CONTENT THAT APPEARS ON THIS SITE COMES FROM AMAZON SERVICES LLC. THIS CONTENT IS PROVIDED 'AS IS' AND IS SUBJECT TO CHANGE OR REMOVAL AT ANY TIME.

Fritz Lang did his best work in Hollywood throughout the 1940s, and The Woman in the Window ranks among his best films from that period. Equally adept at crafting first-rate Westerns and melodramatic thrillers, Lang returned to the latter category for The Woman in the Window, a deliciously devious follow-up to 1944's Ministry of Fear and a near-perfect companion piece to Lang's 1945 follow-up, Scarlet Street. Adapted by producer/screenwriter Nunnally Johnson from J.H. Wallis's novel Once Off Guard, this briskly paced and brilliantly plotted thriller begins with a chance encounter between mild-mannered psychology professor Richard Wanley (Edward G. Robinson) and Alice Reed (Joan Bennett), the stylishly alluring subject of a portrait that Wanley has dreamily admired in a window near the men's club where he socializes with a savvy District Attorney (Raymond Massey) and a friendly physician (Edmund Breon). When Alice invites Wanley to her apartment for casual drinks and conversation, Wanley is forced to kill an intruder, and his subsequent cover-up leads to a nail-biting plot in which Wanley must feign innocence as he "innocently" participates in the D.A.'s investigation with a homicide detective.

Lang was an expert at turning the screws of suspense, and while Johnson's screenplay tempers its convenient coincidences with well-written characters, Robinson's increasing desperation is the engine that drives the plot. When a sleazy blackmailer (Dan Duryea) squeezes Wanley and Reed for every penny they've got, The Woman in the Window winds up to a fever pitch, with a "twist" ending that's either a cop-out or clever, depending on your tolerance for now-familiar surprises. As renowned critic Pauline Kael astutely noted, The Woman in the Window has "the logic and plausibility of a nightmare," and Lang surely enjoyed the superbly cast trio of Robinson, Bennett, and Duryea, for he invited them back for Scarlet Street just a few months later. And speaking of murder, check out the kid playing Robinson's son in one of the opening scenes: that's future real-life murder-conspiracy suspect Bobby (Robert) Blake (subsequently acquitted), at the innocent age of 10. --Jeff Shannon