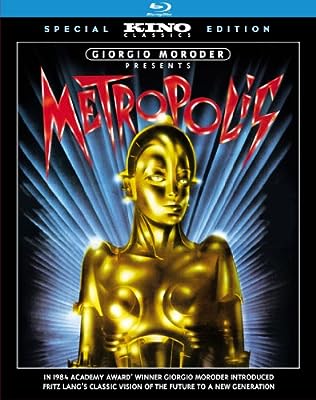 Price: $22.19
As of 2023-02-05 01:21:20 UTC (more info)
Product prices and availability are accurate as of 2023-02-05 01:21:20 UTC and are subject to change. Any price and availability information displayed on http://www.amazon.com/ at the time of purchase will apply to the purchase of this product.
Availability: Not Available - stock arriving soon
Buy Now from Amazon
Product Information (more info)
CERTAIN CONTENT THAT APPEARS ON THIS SITE COMES FROM AMAZON SERVICES LLC. THIS CONTENT IS PROVIDED 'AS IS' AND IS SUBJECT TO CHANGE OR REMOVAL AT ANY TIME.

Freder Fredersen (Gustav Frohlich) is the son of Joh Fredersen (Alfred Able), who reigns over the great city of Metropolis. Freder is surprised to discover his lifestyle has been built on the unseen but backbreaking labor of an entire class of unseen workers who tend the machines that make the city run--and he descends to the subterranean levels of Metropolis in an effort to understand their lives... and, not incidentally, to find the mysterious but beautiful woman Maria (Brigitta Helm) who has inspired his interest in the workers' plight. But his father is concerned by both Freder's interest and Maria's activities among the workers, and he turns to scientist C.A. Rotwang (Rudolf Klein-Rogge) for aid. Rotwang has created a robot, and he agrees to give it the likeness of Maria in order to undermine both Freder's love for the girl and her own activities. But Rotwang has a hidden agenda of his own: once the robot has been unleashed, he will use her to destroy Metropolis and thereby exact revenge on Joh Fredersen for past transgressions against him.

In 1981, 3-time Academy Award Winning composer Giorgio Moroder began a three-year endeavor to restore the science fiction classic, Metropolis. During this restoration Moroder made the controversial decision to give a film a new, contemporary score and added a pop music soundtrack featuring songs from some biggest pop and rock stars of the early MTV era including Pat Benatar, Billy Squier, Freddie Mercury, Bonnie Tyler, Adam Ant, Jon Anderson and more! In addition, to the new score, missing footage was re-edited into the film, intertitles were removed and replaced with subtitles and sound effects and color was added, creating an all new experience... and an all new film. For more than a quarter century, this version of the film has remained out of print, until now. A new HD transfer was created from one of the few remaining prints available and Kino Lorber is presenting the film in the best possible quality, as it was seen in its original release in August 1984.

SPECIAL FEATURES: ''The Fading Image'' Produced by Giorgio Moroder, this rare 1984 short subject documentary chronicles Moroder's restoration of Metropolis (never before available on any home video format and not seen in 27 years), The Original Theatrical Trailer, Photo Gallery, and a special liner notes introduction written by Giorgio Moroder in 2011 for this special edition. New 5.1 audio mix (in addition to the original 2.0 stereo mix)