The Third Man (The Criterion Collection) 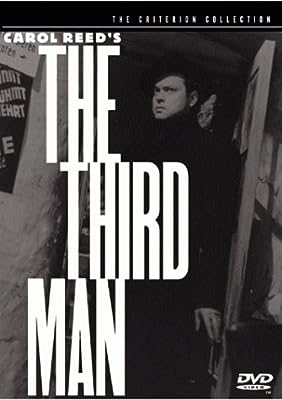 Price: $39.95
As of 2022-11-30 12:41:29 UTC (more info)
Product prices and availability are accurate as of 2022-11-30 12:41:29 UTC and are subject to change. Any price and availability information displayed on http://www.amazon.com/ at the time of purchase will apply to the purchase of this product.
Availability: Not Available - stock arriving soon
Buy Now from Amazon
Product Information (more info)
CERTAIN CONTENT THAT APPEARS ON THIS SITE COMES FROM AMAZON SERVICES LLC. THIS CONTENT IS PROVIDED 'AS IS' AND IS SUBJECT TO CHANGE OR REMOVAL AT ANY TIME.

Orson Welles stars as Harry Lime, and Joseph Cotten plays his childhood friend, Holly Martins, in this all-time classic thriller scripted by Graham Greene and directed by Carol Reed. Martins searches for Lime through the seedy underworld of postwar Vienna and gets caught up in a web of love, deception, racketeering, and murder. The Third Man's stunning cinematography, twisting plot, and unforgettable zither score are immortalized in Criterion's pristine special edition, following the 50th Anniversary theatrical re-release.

The fractured Europe post-World War II is perfectly capturedin Carol Reed's masterpiece thriller, set in a Vienna still shell-shocked from battle. Holly Martins (Joseph Cotten) is an alcoholic pulp writer come to visit his old friend Harry Lime (Orson Welles). But when Cotton first arrives in Vienna, Lime's funeral is under way. From Lime's girlfriend and an occupying British officer, Martins learns of allegations of Lime's involvement in racketeering, which Martins vows to clear from his friend's reputation. As he is drawn deeper into postwar intrigue, Martins finds layer under layer of deception, which he desperately tries to sort out. Welles's long-delayed entrance in the film has become one of the hallmarks of modern cinematography, and it is just one of dozens of cockeyed camera angles that seem to mirror the off-kilter postwar society. Cotten and Welles give career-making performances, and the Anton Karas zither theme will haunt you. --Anne Hurley