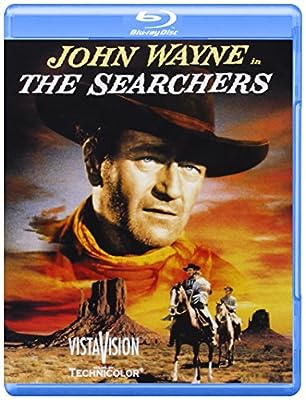 Price: $19.98
As of 2022-11-30 01:52:12 UTC (more info)
Product prices and availability are accurate as of 2022-11-30 01:52:12 UTC and are subject to change. Any price and availability information displayed on http://www.amazon.com/ at the time of purchase will apply to the purchase of this product.
Availability: Not Available - stock arriving soon
Buy Now from Amazon
Product Information (more info)
CERTAIN CONTENT THAT APPEARS ON THIS SITE COMES FROM AMAZON SERVICES LLC. THIS CONTENT IS PROVIDED 'AS IS' AND IS SUBJECT TO CHANGE OR REMOVAL AT ANY TIME.

A favorite film of some of the world's greatest filmmakers, including Martin Scorsese and Steven Spielberg, John Ford's The Searchers has earned its place in the legacy of great American films for a variety of reasons. Perhaps most notably, it's the definitive role for John Wayne as an icon of the classic Western--the hero (or antihero) who must stand alone according to the unwritten code of the West. The story takes place in Texas in 1868; Wayne plays Ethan Edwards, a Confederate veteran who visits his brother and sister-in-law at their ranch and is horrified when they are killed by marauding Comanches. Ethan's search for a surviving niece (played by young Natalie Wood) becomes an all-consuming obsession. With the help of a family friend (Jeffrey Hunter) who is himself part Cherokee, Ethan hits the trail on a five-year quest for revenge. At the peak of his masterful talent, director Ford crafts this classic tale as an embittered examination of racism and blind hatred, provoking Wayne to give one of the best performances of his career. As with many of Ford's classic Westerns, The Searchers must contend with revisionism in its stereotypical treatment of "savage" Native Americans, and the film's visual beauty (the final shot is one of the great images in all of Western culture) is compromised by some uneven performances and stilted dialogue. Still, this is undeniably one of the greatest Westerns ever made. --Jeff Shannon