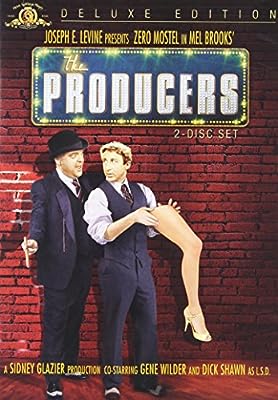 Price: $11.62
Availability: Not Available - stock arriving soon
Buy Now from Amazon
Product Information (more info)
CERTAIN CONTENT THAT APPEARS ON THIS SITE COMES FROM AMAZON SERVICES LLC. THIS CONTENT IS PROVIDED 'AS IS' AND IS SUBJECT TO CHANGE OR REMOVAL AT ANY TIME.

A "startling, stunning, outrageous [and] breathtaking debut" (Los Angeles Times) from acclaimed writer/director Mel Brooks (Young Frankenstein, Spaceballs), this Oscar®-winning* comedy combines "pure pell-Mel lunacy [and] wild, ad-lib energy [into an] uproariously funny" (Time) film! Low-rent Broadway producer Max Bialystock (Zero Mostel) and his high-strung accountant, Leo Bloom (Gene Wilder), discover that, with the help of a few gullible investors, they can make more money on a flop than on a hit! Armed with the worst show ever written ("Springtime for Hitler") and an equally horrific cast, this double-dealing duo is banking on disaster. But when their sure-to-offend musical becomes a surprise smash hit, they find themselves in the middleof a Broadway blitzkrieg! *1968: Original Screenplay