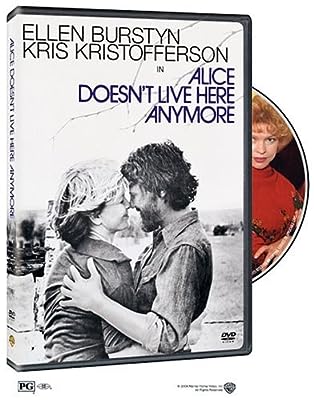 Price: $19.98
As of 2022-08-13 11:42:04 UTC (more info)
Product prices and availability are accurate as of 2022-08-13 11:42:04 UTC and are subject to change. Any price and availability information displayed on http://www.amazon.com/ at the time of purchase will apply to the purchase of this product.
Availability: Not Available - stock arriving soon
Buy Now from Amazon
Product Information (more info)
CERTAIN CONTENT THAT APPEARS ON THIS SITE COMES FROM AMAZON SERVICES LLC. THIS CONTENT IS PROVIDED 'AS IS' AND IS SUBJECT TO CHANGE OR REMOVAL AT ANY TIME.

When housewife Alice is suddenly widowed and left with no money and no job to support herself and her son, she sets off across the country to find a new life.
Genre: Feature Film-Drama
Rating: UN
Release Date: 17-AUG-2004
Media Type: DVD

Having scored a critical triumph with Mean Streets, Martin Scorsese accepted Alice Doesn't Live Here Anymore as his first big-studio assignment, proving his versatility and further advancing his promising career. Hot off The Exorcist with her choice of projects at Warner Brothers, Ellen Burstyn sought a hot young talent (Scorsese was recommended by Francis Coppola) to direct Robert Getchell's fine, sensitive screenplay about Alice Wyatt, a newly-widowed 35-year-old lounge singer with a bratty 12-year-old son (Alfred Lutter) and a very uncertain future. Her pursuit of broken dreams lands her a waitressing job in an Arizona diner, where she befriends foul-mouthed Flo (Diane Ladd) and meets and falls in love with a divorced farmer (Kris Kristofferson). With absolute authenticity of emotion and incident, Alice--which earned Burstyn a well-deserved Oscar® and features supporting roles for future Taxi Driver costars Jodie Foster and Harvey Keitel--conveys a then-timely sense of strength and endurance from a single mother in desperate times. There have been several similar dramas made since 1974, but Alice (which inspired the popular TV sitcoms Alice and Flo) is still the best. Trivia buffs: Look closely for Ladd's daughter--a very young Laura Dern--and Scorsese as background extras in the diner scenes. --Jeff Shannon

A Tale of Two Cities

A Bridge Too Far

A Raisin in the Sun