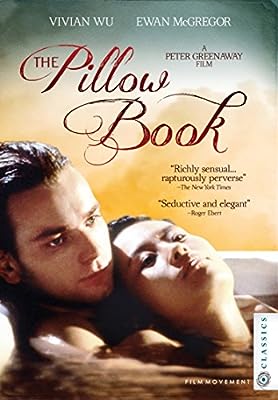 Price: $24.95
As of 2023-02-06 06:10:32 UTC (more info)
Product prices and availability are accurate as of 2023-02-06 06:10:32 UTC and are subject to change. Any price and availability information displayed on http://www.amazon.com/ at the time of purchase will apply to the purchase of this product.
Availability: Not Available - stock arriving soon
Buy Now from Amazon
Product Information (more info)
CERTAIN CONTENT THAT APPEARS ON THIS SITE COMES FROM AMAZON SERVICES LLC. THIS CONTENT IS PROVIDED 'AS IS' AND IS SUBJECT TO CHANGE OR REMOVAL AT ANY TIME.

Now fully restored and available for the first time in high definition through Film Movement Classics.

Beautiful to behold and impossible to forget, The Pillow Book is auteur Peter Greenaway's erotically-charged homage to the art of calligraphy and the indelible nature of even our earliest memories. As a young girl, Nagiko (Vivan Wu) became her father's canvas each year on her birthday, as he'd paint on her face and neck the creation myth in elaborate, elegant calligraphy. As a young woman, she finds pleasure in continuing the practice with a succession of lovers, particularly a bisexual translator (Ewan McGregor) who becomes a pawn in an escalating game of revenge on the publisher who once exploited her beloved father's hard work.

Bonus Features, include: New Director's Commentary by Peter Greenaway, filmmaker Bio and Statement, amongst others