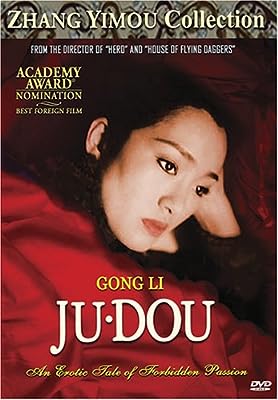 Price: $16.98
As of 2023-02-06 14:51:23 UTC (more info)
Product prices and availability are accurate as of 2023-02-06 14:51:23 UTC and are subject to change. Any price and availability information displayed on http://www.amazon.com/ at the time of purchase will apply to the purchase of this product.
Availability: Not Available - stock arriving soon
Buy Now from Amazon
Product Information (more info)
CERTAIN CONTENT THAT APPEARS ON THIS SITE COMES FROM AMAZON SERVICES LLC. THIS CONTENT IS PROVIDED 'AS IS' AND IS SUBJECT TO CHANGE OR REMOVAL AT ANY TIME.

Ju Dou is a 1990 Chinese film directed by Zhang Yimou and Yang Fengliang (though it is almost universally considered to be a product of Zhang's vision as director) and starring Gong Li as the title character. It is notable for being shot in vivid three-strip Technicolor long after the process had been abandoned in the United States. It was also the first Chinese film to be nominated for an Academy Award for Best Foreign Language Film, in 1990. The film is a tragedy, focusing on the character of Ju Dou, a beautiful young woman who has been sold as a wife to Jinshan, an old cloth dyer. The film was banned for a few years in China, but the ban has since been lifted. The Chinese government gave permission for its viewing in July 1992.