Diary of a Chambermaid (The Criterion Collection) 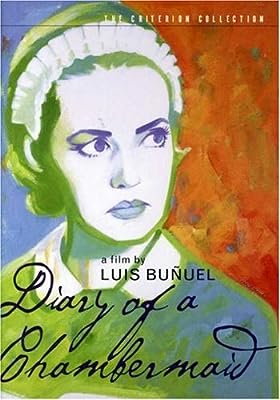 Price: $29.95
As of 2023-02-06 05:18:36 UTC (more info)
Product prices and availability are accurate as of 2023-02-06 05:18:36 UTC and are subject to change. Any price and availability information displayed on http://www.amazon.com/ at the time of purchase will apply to the purchase of this product.
Availability: Not Available - stock arriving soon
Buy Now from Amazon
Product Information (more info)
CERTAIN CONTENT THAT APPEARS ON THIS SITE COMES FROM AMAZON SERVICES LLC. THIS CONTENT IS PROVIDED 'AS IS' AND IS SUBJECT TO CHANGE OR REMOVAL AT ANY TIME.

This wicked adaptation of the Octave Mirbeau novel is classic Luis Buñuel. Jeanne Moreau is Celestine, a beautiful Parisian domestic who, upon arrival at her new job at an estate in provincial 1930s France, entrenches herself in sexual hypocrisy and scandal with her philandering employer (Buñuel regular Michel Piccoli). Filmed in luxurious black-and-white Franscope, Diary of a Chambermaid is a raw-edged tangle of fetishism and murder-and a scathing look at the burgeoning French fascism of the era.

Considered surrealist Luis Buñuel most linear film, Diary of a Chambermaid is an excellent introduction to this director's dark satirical world of social criticism. Loosely based on Mirbeau's Journal D'Une Femme de Chambre, Buñuel uses the beautiful French countryside as a backdrop to ruthlessly display his favorite subjects: Catholicism, the bourgeoisie, nationalism, and moral decay. Jeanne Moreau is Celestine, a chambermaid from Paris who takes a job at a picturesque country estate. When the body of the staff's daughter is discovered raped and murdered, Celesine does whatever is necessary to uncover the girl's killer. She quickly learns that her new employees, though apparent pillars of nouveau aristocracy, are as morally corrupt as the girl’s murderer. Though extremely linear for Buñuel, Diary of a Chambermaid does not lack for profound, symbolic imagery and cryptic revelations. --Rob Bracco