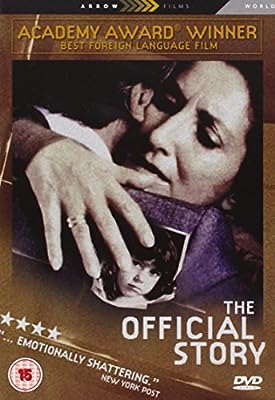 Price:
As of 2023-02-01 07:10:37 UTC (more info)
Product prices and availability are accurate as of 2023-02-01 07:10:37 UTC and are subject to change. Any price and availability information displayed on http://www.amazon.com/ at the time of purchase will apply to the purchase of this product.
Availability: Not Available - stock arriving soon
Buy Now from Amazon
Product Information (more info)
CERTAIN CONTENT THAT APPEARS ON THIS SITE COMES FROM AMAZON SERVICES LLC. THIS CONTENT IS PROVIDED 'AS IS' AND IS SUBJECT TO CHANGE OR REMOVAL AT ANY TIME.

United Kingdom released, PAL/Region 0 DVD: it WILL NOT play on standard US DVD player. You need multi-region PAL/NTSC DVD player to view it in USA/Canada: LANGUAGES: Spanish ( Dolby Digital 2.0 ), English ( Subtitles ), SPECIAL FEATURES: Interactive Menu, Scene Access, SYNOPSIS: This is an emotionally gripping, fictional look at a couple torn apart by the infamous Argentine campaign of killings and torture that sent thousands of accused terrorists to unmarked graves in the mid-and late-'70s. Alicia (Norma Aleandro) and Roberto (Hector Alterio) adopted a little girl (Analia Castro) during this period of governmental terror in Argentina. Alicia has always wondered about the parents of their little girl, a topic her husband has forced her into forgetting as a condition of the adoption - he alone knows the full story. Thanks to censorship, Alicia - like others - is not fully aware of how much killing has gone on until her students at school start complaining that their textbook histories were written by murderers. Add to this a long conversation with a friend who had been in exile after she was tortured by the government, and Alicia starts to do some serious political and personal research on her own. The results reveal the identity of the little girl's dead parents and reveal that Alicia's husband has had a nasty hand in the government repression and dirty dealings with foreign businesses. She also learns the identity of the girl's grandmother. Her next decision will determine what to do with this information. SCREENED/AWARDED AT: Berlin International Film Festival, Cannes Film Festival, David Donatello Awards, Golden Globes, Oscar Academy Awards, Toronto International Film Festival, ...The Official Story (1985) ( La Historia oficial ) ( The Official History )

Women on the Verge of a Nervous Breakdow...