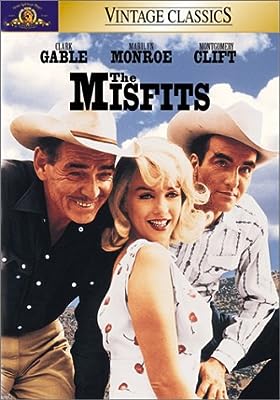 Price: $11.98
As of 2023-02-05 03:57:20 UTC (more info)
Product prices and availability are accurate as of 2023-02-05 03:57:20 UTC and are subject to change. Any price and availability information displayed on http://www.amazon.com/ at the time of purchase will apply to the purchase of this product.
Availability: Not Available - stock arriving soon
Buy Now from Amazon
Product Information (more info)
CERTAIN CONTENT THAT APPEARS ON THIS SITE COMES FROM AMAZON SERVICES LLC. THIS CONTENT IS PROVIDED 'AS IS' AND IS SUBJECT TO CHANGE OR REMOVAL AT ANY TIME.

Expertly directed by John Huston (The Maltese Falcon) from a screenplay by Pulitzer Prize winner Arthur Miller, The Misfits is a probing, exciting drama (The Film Daily) of honesty, intensity and sheer poetic brilliance. Divorced and disillusioned, Roslyn Tabor (Marilyn Monroe) befriends a group of misfits, including an aging cowboy (Clark Gable), a heartbroken mechanic (Eli Wallach) and a worn-out rodeo rider (Montgomery Clift). Through their live-for-the-moment lifestyle, Roslyn experiences her first taste of freedom, exhilaration and passion. But when her innocent idealism clashes with their hard-edged practicality, Roslyn must risk losing their friendship...and the only true love she's ever known.

It was the last roundup for Clark Gable and Marilyn Monroe, who gave their final performances in this melancholy modern Western. Arthur Miller wrote the script (some say overwrote) as a contemplation of his then-wife, Monroe, and set the piece in the half-world of Reno, Nevada. The dangers of this kind of meta-fictional approach are not entirely avoided, but the clean, clear-eyed direction of John Huston keeps the film grounded. And then there are the people: Gable a warrior past his time, Monroe overwhelmed by the world and its attentions, Montgomery Clift visibly broken in pieces, Eli Wallach a postwar neurotic. If the encroaching mortality of Gable, Monroe, and Clift weren't enough, the stark photography and Alex North's score confirm this as a film about loss. It may have its problems, but seen at a distance of many years, The Misfits scatters its tender mercies with an aching beauty. --Robert Horton